My daughter, a second grader, loves ghosts and zombies and Halloween.  We read Grimm fairytales together and she is now old enough to enjoy films like Ghostbusters.  It is to my considerable delight that she is not easily phased by the macabre. 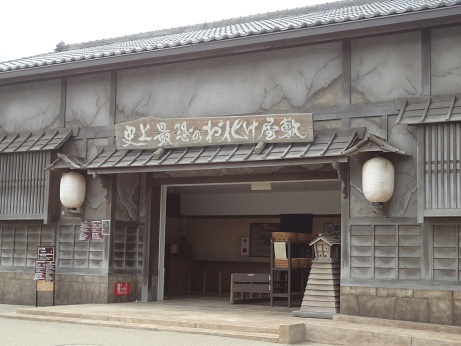 This place is legit.

But last summer I made the mistake of taking her to a haunted house in Eiga-mura, a theme park in Kyoto that looks like a samurai movie film set.  Almost every haunted house I’ve ever been to has been something of a disappointment, but this one was incredibly well done.  It’s a bit like stepping into a Fatal Frame level, complete with dilapidated tori gate and women with long hair in white funeral garb.  It was way scarier than I expected, and way beyond what a reasonable parent should expose a second-grader to.  My daughter lost it after the first jump scare and I had to carry her the rest of the way.  A significant investment in ice cream was made immediately thereafter.

The most effective thing about the Eiga-mura haunted house is that it is free of hokey animatronics and plastic skeletons.  It’s dark, it has a well-made set, and it employs actual humans to run up behind you and scream bloody murder.  This is like the ultimate pop-out scare because it’s literally a person popping out of a hidden door, dressed in all sorts of scary makeup, yelling at the top of their lungs.  I don’t care how stone cold you think you are, that shit is startling.

I was reminded of this parenting fail the other day while playing some horror games in VR.  Since Dead Secret is a VR game, I’ve spent some time playing other VR horror titles to see what the state of the industry is like.  Most of these games are just experiments, little vignettes designed to explore one aspect of VR horror.  I like the way Dreadhalls plays with perception by moving things when you aren’t looking at them.  I like how Alone forces you to focus on one spot and then makes sure you know things are happening behind you.  And Alien: Isolation was the VR experience that convinced me that the medium had finally arrived.

But a lot of the horror games I’ve seen in VR boil down to virtual versions of that haunted house in Kyoto.  A convincing environment that you wander through, followed by a screaming monster that comes out of nowhere and gets all up in your face.  Some of these “virtual haunted houses” are really well done in terms of art and sound production.  A few of them even try to do interesting things to ratchet the tension up before the inevitable jump scare.  And if you had any questions about the effectiveness of this sort of scare, there are a thousand YouTube videos of people screaming their guts out.  If you want to make a virtual haunted house, now’s the time.

Maybe I’m a jaded cynic, but I find all of these virtual haunted house games to be terrifically boring.  I thought about it for a while, and I think the main reason is that there’s just nothing to them beyond the immediate experience.  Like a real haunted house there is no story, no characters, nothing to really work the brain.  Just dark hallways and women with bleeding eyes lunging from the occasional nook or cranny.  To me, this is the simplest, safest form of horror you could possibly make.  These titles remind me of the types of games Richard Rouse III has called “empty calories,” the interactive equivalents of junk food.  While satisfying in the short term, they have no real value or longevity.  They don’t tackle the problems that make horror a difficult genre to do well.

With so many developers now working on horror projects in VR, I wish that more of them would tackle those hard problems.  Haunted houses are great, but they are short, shallow affairs.  Given the powerful feeling of presence that VR affords, it seems like a missed opportunity to use it for pop-out scare factories.