Surrealist games have it rough. Surrealism is about taking your assumptions and twisting them in a way you did not expect. You should come away with the cogs in your head grinding furiously.  The best surreal titles juxtapose the insane with the mundane to show you their contrast and, if you’re lucky, a startling similarity or two.  But to do this, to startle you and make you think, the surrealist title has to defy your expectations.  It has to tell you it’s one thing and then be another.  And in the world of video games, where titles are sold on trailers and box art and numerical review scores, that’s a rough spot to be in. 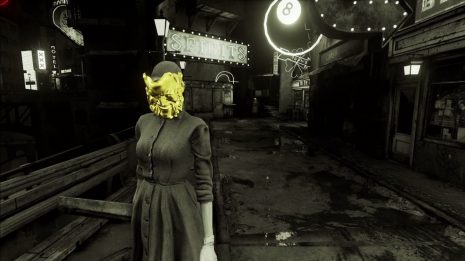 You can’t sell a game on surrealism.  It doesn’t work if you go in expecting some weird-ass shit.  Metal Gear Solid 2 is a surreal game, but you don’t sell it by talking about the part where the President of the United States grabs the protagonist’s crotch, or the part where the mini-map is replaced by a pin-up model, or the part where the game tells you to turn the PS2 off.  You sell it as a stealth military action game and then you let the weird stuff seep in in the second half, when the innocent player is already invested and doesn’t realize he’s about to have his assumptions challenged.  You sell it as a game about a white dude shooting masked terrorists so that you can pay the bills.  The surreal stuff has to be surprising.  You gotta ease them into it.  And still they’ll say that Metal Gear Solid 2 is the worst Metal Gear because it makes no sense.

I played two surreal horror games this year, Here They Lie and Albino Lullaby.  I played both in VR, and VR has a lot to do with the way those games operate, but  for today I’m going to ignore that aspect.  Oh, and, full disclosure: I worked with the Albino Lullaby team on their Oculus Rift version, which launched earlier this year.

Both Here They Lie and Albino Lullaby received mediocre reviews, and I think that’s mostly because they are just too weird for the mainstream crowd.  There are legitimate complaints as well, of course: both titles are sickening for some people in VR (but not for me), Here They Lie has some problems with the fidelity of its graphics, and both are mechanically very simple (no combat, no items, minimal puzzles, some stealth).  But I think the real complaint here is that these games appear to be building towards some narrative conclusion and then, part way through, take a left turn to Weirdville and never come back.  They are designed to make you think after the game machine has been shut off, and that’s not generally what the mainstream review system values.

Here They Lie starts out looking like it’s going to be a scary walking simulator with some enemies and a bit of stealth.  From the beginning, it’s clear that there is more going on than what appears on the screen.  In fact, the game goes out of its way to use color contrast to highlight the idea that the world is not what it appears to be.  But then Here They Lie takes a turn and drops you in the a city of people with animal heads.  If you’ve been paying attention, you might have noticed that the enemy design is pretty Freudian, and that raises questions about who exactly you are playing as. But if you aren’t paying much attention you probably just think the freaky animal people are some weird shit in a horror game.  Eventually the twists get more dramatic, and if you didn’t think much of the breathing subway tunnel then the flying space mandala is almost certainly going to seem like it came out of nowhere.  The “problem” with Here They Lie is that it’s asking a lot of the player, and as a surreal game it’s not about to make any of the answers easy. 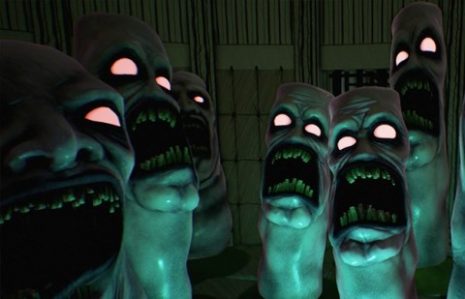 Albino Lullaby is thematically a completely different beast.  It uses a crazy, tongue-in-cheek art style that looks more like the box art for a ’80s direct-to-video horror flick than a surrealist video game.  Albino Lullaby is more straightforward with its narrative too, and you can easily play it with your brain on autopilot.  That is, of course, until you find something that gives the weirdness meaning, and makes it more horrible than it was before.  Despite its bombastic style, there’s a method to Albino Lullaby’s madness, and the clearer the truth becomes the more thought it requires.  If it sounds like I’m speaking in vague generalities here, it’s because I am: it’s very hard to talk about this title without undoing it.  Suffice it to say that Albino Lullaby is a level designer’s game, with crazy architecture that is surprising and occasionally genius.  But under the hood, the real meat of the title is its surrealist, dreamlike quality, and its penchant for posing uncomfortable questions without providing answers.

Both of these titles sell themselves as horror games with unique visual styles.  And that’s what they are.  But that pitch doesn’t prepare you for what Here They Lie and Albino Lullaby are really up to, and I think some players come away surprised and confused.  They were expecting some spooky monster shenanigans and ended up with cryptic meditations on the structure of consciousness and the complicity of victims in abusive relationships instead.  They expected the latest Stephen King novel but got Fyodor Dostoevsky.

But that’s how it has to be.  You can’t sell Here They Lie on space mandalas.  If you did, it would be expected and would cease to be thought provoking.  The whole point is to subvert the player’s expectations.  But some players don’t like that.  Some aren’t ready for it.  Some were just looking for a way to relax on a Friday night with a beer.  And those folks aren’t interested in the dramatic difficulty of what Here They Lie and Albino Lullaby are attempting to do.

I’m telling you, surrealist games have it t

2 thoughts on “It’s Been Surreal”