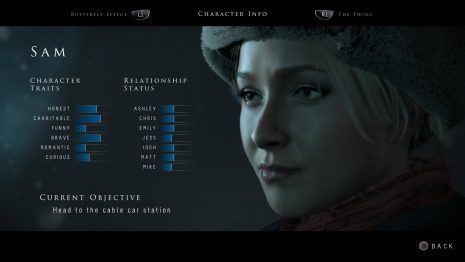 The character art in Until Dawn is unbelievably great.

It’s pretty hard to write about Until Dawn. It is probably the highest-end horror game ever made. The art, cinematography, acting, and overall presentation set an exceptionally high standard. In addition to this impeccable production quality the gameplay is pretty great as well. The controls are good and the camera system is a glorious evolution of the best Golden Age horror games. Everything about it is stellar, even the theme song. Until Dawn sets itself apart by choosing the Slasher genre as its story frame (haven’t seen that done well since Clock Tower: The First Fear), and its approach to a branching storyline with significantly different outcomes is its key hook. Any way you look at it, Until Dawn should be a phenomenal horror game. But it’s hard to write about because despite oozing with quality, Until Dawn made me more angry and frustrated than any other game in recent memory.

There’s an Orson Scott Card short story called But We Try Not to Act Like It about a dystopian future in which the government forces constant TV exposure on people they deem to be living on the margins. The protagonist is stuck with a soap opera that he recognizes as the story of Penelope, waiting faithfully for Odysseus to return from certain death.  When the soap veers from the archetype the protagonist has a nervous breakdown and eventually kills himself.

This story has been lying somewhere deep in the recesses of my brain for twenty years, but playing Until Dawn hoisted it from the silt.  To explain the connection, and why Until Dawn made me want to bury my Playstation in a hole in the yard, I need to back up a bit.

The key feature of Until Dawn is its branching storyline.  Decisions that you make can have consequences later in the game, and there are so many choices that there are hundreds of ways that the story could end.  Until Dawn goes out of its way to explain this to you.  It introduces the Butterfly Effect concept in its introductory movie and lets you know every time a branch has been selected.  Characters even refer to the idea in the game’s dialog.  It’s really, really important that you understand that your choices lead to different outcomes.

This is especially true because Until Dawn uses a “fail and continue” model of storytelling.  You never restart a sequence to try again.  If you mess up the story just moves on.  Until Dawn does a good job keeping the story cohesive even when characters die at unexpected times or discover optional story details.  If you didn’t know that the game was built around branching you might not even realize that a decision had been made.

There’s precedent for that kind of mistake: Beyond: Two Souls attempted a similar branching system and failed miserably.  In that game the decisions you make are almost always implicit, and as a result the connection between your actions and later events is unclear.  Many people played Beyond and thought it was a absolutely linear story game.  The Until Dawn developers clearly understood that their fancy branching decision tree must be very obvious so that players understand that their actions have consequences. 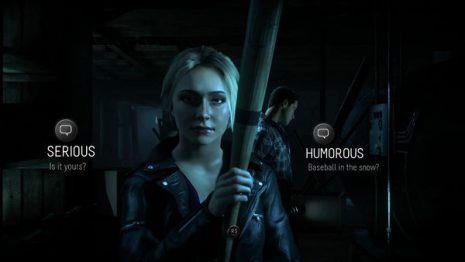 The Butterfly Effect guarantees that your skill in decision making is meaningless.

The problem with this model is that it doesn’t actually give the player control over the outcome of the game.  The whole point of the Butterfly Effect is that you cannot predict the consequences of an action.  In Until Dawn, decisions range from ominous (“stick with the group or venture out on your own?”) to mundane (“go left or go right?”) and there’s no way to guess what the effect will be.  Unlike other games with highly branching stories (such as Virtue’s Last Reward, which actually shows you the tree and lets you jump between branches), you cannot easily experiment with a decision before electing to move forward with it. As a result, the decisions are almost entirely meaningless.  Since you can’t predict the outcome there’s no point in thinking about the decision itself.  Go left or go right, it doesn’t matter.  Whatever is going to happen is going to be arbitrary and unpredictable, so you might as well flip a coin.  Your ability to make good, rational choices is not a very valuable asset in Until Dawn.

The reason to do it this way, I think, is to encourage replays.  Sure, the decisions are unpredictable, but if you chose left last time and choosing right this time leads to a significantly different outcome, that’s pretty cool, right?  Maybe you should play it over and over again and see how the outcomes change depending on your coin flips.

The major drawback to this model is that it completely guts any power the story might have had.  A horror game needs you to be invested in its characters so that you’ll be scared for them when you play.  But your favorite character could be killed at any time, and you might not even understand the conditions that lead to that death.  Until Dawn makes the point over and over again that nobody is safe, any of these people could die, and that you can’t go back and fix it.  Rather than making you work harder to protect them, this turns the characters into disposable nobodies.  Your control of the story is obfuscated across a thousand decision points.  Even if you try you cannot ensure the safety of these people.  So you stop caring about them.

Contrast this with Life is Strange, which uses a very similar branching system (right down to similar Butterfly Effect iconography).  The difference between these two titles is that Life is Strange’s decisions usually have a nearly immediate result, and if you don’t like how it turns out you can rewind time and try it again.  At a few specific points Life is Strange asks you to make bigger decisions that can’t be so easily undone.  But when it does this, it makes the potential consequences of each choice clear.  Decisions are hard in Life is Strange not because of the law of unintended consequences, but precisely because you can imagine exactly what might happen.  This may seem like a small tweak on the system proposed by Until Dawn, but in practice the difference is enormous.  Life is Strange was my game of the year last year, and Until Dawn makes me want to crack my controller in half and slit my wrists with the plastic shards.

To be fair, there are a few big decision moments where the immediate result of your decision is obvious.  Will you let a character live or sacrifice him for another?  But even these decisions, while clear in the short term, have unknowable consequences in the long term.  After a while it doesn’t really seem to matter. 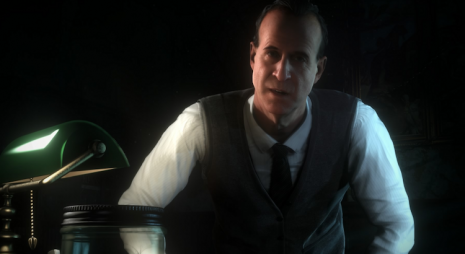 Dr. Michael Kaufmann Dr. Alan Hill is my favorite part of Until Dawn.

One of the famous tropes of Slasher films is that they have an implicit moral code.  The sexually active teens are sluts and will die.  The arrogant jocks will die.  The most suspicious character will die.  The character who cares for the main character will die, just to show how cruel the psycho killer can be.  This system is so codified that we actually have terms, like Final Girl, to describe it.  But here’s the thing: these films are not trying to preach.  The “moral code” doesn’t exist to teach you that sex is bad, or that jerks will get their comeuppance.  It’s there to telegraph to the audience who they should be rooting for.  It’s a way to identify the protagonist, who will ultimately survive, so that the viewer has something to latch onto and become emotionally invested in.

The problem with Until Dawn is that a branching storyline doesn’t necessarily produce a good story.  If you are emotionally invested in a character who gets killed, you feel bad.  If you don’t identify with the characters then their achievements are meaningless and you feel bad.  You can’t even really take ownership for the story outcome because branching doesn’t actually lead to agency.  Despite making choices left and right, you aren’t really behind the wheel.  I felt more like a rat in a maze, and that’s really the source of my immense frustration with this game.

Until Dawn is a Slasher film in which your Final Girl can die in the last reel.  To make good on the promise of branching and unintended consequences Penelope might give up on Odysseus and choose a suitor, and there’s nothing you can do about it.  The result, at least for some, is a terrible story that makes you feel bad.  And that’s why, despite being exceptionally well-produced and designed for heavy replayability, I never want to play Until Dawn again.