The directions on my phone said that I should take Exit 4 out of the subway, turn left at the light, and continue through a commuter tunnel (which, from the picture, looked a bit dank, the way we used to use that word before it was about drugs or memes).  I would emerge before a giant billboard positioned above a squat door that was the only entry to my destination.  From there my online guide assured me that I would descend into a sprawling network of hallways where video game treasures, both contemporary and obscure, could be purchased for a song.  I was on my way to Video Game Alley, Seoul’s premier electronic entertainment emporium / basement.

I glanced at my watch.  I had abandoned my family in a Western-style department store owned by a chewing gum company, skipped lunch, and spent the better part of an hour navigating color-coded subway lines until I managed to arrive at Sinyongsan Station.  I had just under an hour and a half to find this flea market of dreams and get back to my hotel in time to catch a taxi to the airport, ideally reuniting with my wife and children at some point before I left the country. 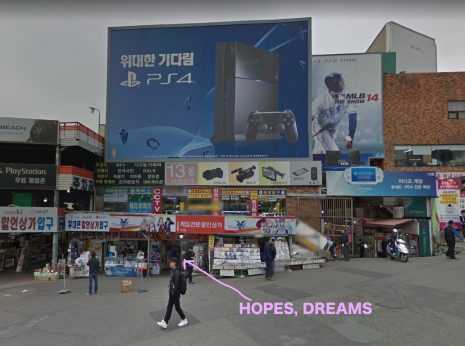 As I climbed the steps of Exit 4 I mulled over the potential consequences screwing this up.  If I got lost I would miss my flight, then miss our subsequent connecting flight in Tokyo, which would almost certainly wreck the ensuing trip to the countryside my in-laws had planned for us.  The cascade of failure events wouldn’t end there–my programmer brain decided that, depending on how badly my luck went, there were plausible scenarios in which I would be renounced by my family and forced to live as a vagrant.  I speak no Korean whatsoever, my destination was a vague sequence of directions, and my only means of communication a rapidly-dying phone with 2G international roaming.  On the butterfly effect scale I rated this outing A Sound of Thunder.

Still, I’d already come this far.  Besides, I was on a mission: I’d learned of an ultra-obscure, South Korea-only survival horror PS2 game (from fellow horror enthusiast / broken person @Grendesu) called Mystic Nights, and I had to have it.  I’ve trawled Akihabara and Den Den Town, the street markets in Hong Kong and the night markets in Taiwan, looking for weird, obscure video games, and these days it is rare to come across something in this genre that is entirely unknown to me.  But Mystic Nights was something new, something I wasn’t going to find on Amazon, something worth searching for.  It might be a terrible game, but the only way to find out for sure was to delve into this subterranean cavity of electronic entertainment.

To my dismay, Exit 4 looked nothing like the photos attached to my guide.  Worse, the subsequent directions didn’t make sense: there was no light to go left at, no commuter tunnel.  I was standing in the middle of a major business thoroughfare which was definitely way too modern and swank to accommodate a dingy nerd den.  The blog I had sourced for this trip was only eight months old, but apparently the entire Sinyongsan area had been rebuilt in that time (such is the rate of growth in Seoul these days, I guess).  If I had a mechanical watch I would have been able to feel the minute hand moving.

I don’t know exactly how I figured out which way to go.  Maybe it was my programmer brain, debugging the problem in the background while I stood around looking like an idiot for ten minutes.  Maybe it was my rising level of panic.  Whether asynchronous problem solving or panic-induced adrenaline, it somehow dawned on me that the subway exits had been renumbered.  This lead me to another exit, the True Exit 4, which linked up to a pedestrian tunnel (which was nothing like the photo, but I was running out of options fast), which deposited me at the edge of a broad intersection that looked like it might be seedy enough to conceal a sanctum of digital entertainment.

And there I stopped. This is where my sherpa blog fell silent.  Rows of sketchy vendors selling decrepit flip phones by the pound stretched down the street before me.  The key landmark in this area, a giant Playstation billboard, was nowhere to be seen.  To my right a man was selling printers of all shapes and sizes, similar only in that each was built before the invention of USB.  He had them stacked like skulls at the border of his stall.

I had just under 60 minutes.  Half that, my programmer brain warned me, to account for the train ride back my hotel.

There’s a scene in Indiana Jones and the Last Crusade in which Indy, hot on the trail of the Holy Grail, has to take a leap of faith into a deep underground cavern.  He steps into space and comes down unexpectedly upon a stone bridge that is hidden in plain sight.  The stone color of the bridge is so similar to the chasm below it that it is nearly invisible until the camera pans across the scene and it is revealed by the power of parallax.  Wishing I felt/looked more like Harrison Ford, I extended my foot over the edge of the curb and stepped forward towards the flip phone vendors. 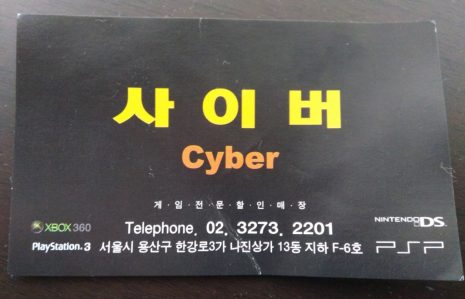 If you’re ever in South Korea and need old games, this guy will hook you up.

The billboard, it turned out, was right in front of me.  It had been stripped of its Playstation advertisement and stood naked against the side of the building, identifiable only by the thin metal frame that surrounded it.  Nestled below it, as promised by the outdated blog post to which I had pinned my dreams and possibly my future, stood a little unmarked door.

Video Game Alley is less of an alley and more like a narrow hallway, a gauntlet of five-foot stalls holding tables jam-packed with plastic game boxes.  At 1 PM on a weekday it was deserted.  Many of the stalls were empty, covered in black cloth.  In a few, middle aged women snoozed in their chairs, barely visible behind great stacks of CD cases.  I was the only customer in the entire place.

I found a stall that sported both PS2 games and a conscious proprietor and made a bee line for it.  It was immediately apparent that neither of us spoke a word of each other’s language, but I was able to communicate my goal via the universal tongue of pointing at a picture on my cell phone.  This guy didn’t have Mystic Nights for sale, but he hurried me over to another stall, threw back the black cloth that market it as closed for business, and began sorting through a massive library of PS2 games.  I ran my finger along the opposite side of the stack, desperately trying to remember what the Hangul for Mystic Nights looks like.

But instead I will tell you this: after I deciphered the train fare, after I made my way back to the station near my hotel, after I collected our bags and found a seat in the lobby, I looked at my watch.  I had made it back to our rendezvous point with ten minutes to spare.  I pulled Mystic Nights out of its bag and looked at the case, turned it over in my hands.  It wasn’t just an obscure video game.  It was victory.