This year’s Electronic Entertainment Expo made it clear that the current generation of console hardware has been conquered. The graphical quality of almost everything at the show was excellent: Devil May Cry 3, Prince of Persia 2, DOOM 3, Metal Gear Solid 3, even the new Crash Bandicoot game had some pretty awesome visuals. All three platforms had an extremely strong show in terms of graphical quality.

The expo also made it clear that the industry is becoming increasingly conservative in terms of game design. Almost every single game on display was a sequel, license, or both. Some companies are trying to cross-bread their licenses (Crash and Spyro appear together in their next outing, Namco is repurposing a Tekken character for Death By Degrees, etc), but very, very few wholly original titles were on display. Notable exceptions included Fable, Second Sight, Notorious, Under The Skin, and Red Ninja.

The big event of the show was the competitive unveiling of Sony’s PSP handheld and Nintendo’s DS handheld. The design of these two systems is a good example of the way the two companies work: Sony’s system is sleek and powerful, but it is basically designed to provide the games we currently play on our TVs in a mobile form. Nintendo’s system is less powerful and much less sexy-looking, but the stylus-driven dual screen already shows amazing potential for new types of game designs. While Sony had technology demos displaying the power of the PSP’s 3D hardware, Nintendo’s demos are almost entirely centered on game design. Both systems are going to be great, but both are also going to target totally different audiences. Personally, I am more interested in the DS, as it is clear that Nintendo is trying to create a system that promotes original game designs. 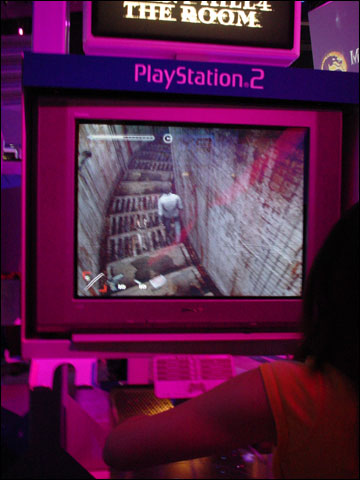 Apart from their handheld systems, both Nintendo and Sony had a pretty strong showing. Nintendo’s Donkey Kong Jungle Beat was by far the most fun title I played at the show: if you have not heard of it already, it is a deep sidescroller that uses the Donkey Konga drum controller as its input device. Sony was also showing Gran Turismo 4, Metal Gear Solid 3, and Silent Hill 4, all of which looked promising. The highlight of the show, however, was Resident Evil 4 on the GameCube. Not only was it just about the most beautiful game on the floor, it was amazingly fun to play.

The Microsoft booth was disappointing. All the games showing had excellent graphics, but very few of them actually looked interesting to play. Capcom had an excellent booth, including Viewtiful Joe 2, Onimusha 3, the aforementioned Resident Evil 4, and a couple of other really nice titles. Bandai’s Ghost in the Shell game looks really cool, but the control scheme is very weird. Half-Life 2 looked pretty much the same as last year, and STILL wasn’t playable. Vivendi-Universal were showing a cool Tenchu-style game called Red Ninja, which looks like fun but is also cheapened by some gratuitous panty shots.

Speaking of panty shots, there was more digital T&A this year than ever before. Games like Namco’s Death By Degrees seem to have simply given up on compelling game design and decided that the only way they can sell units is to include a lot of shots of the protagonist’s ass. I find this trend is disappointing, but not because some of these games are morally questionable; rather, it is disappointing because sex is not a replacement for quality game design. Death By Degrees is not an original title; it’s Rise To Honor with Jet Li replaced with Tekken’s Nina. The trend of simply taking an established formula and sticking some women in skimpy clothing on it was alarmingly prevalent.

Silent Hill 4: The Room. Silent Hill 4 is something of an enigma. The game looks like Silent Hill, and most of it plays like Silent Hill, but there is something very different about the latest game in this creepy series. First of all, the game progression has been dramatically altered: instead of wandering around a deserted town as in previous games, each of The Room’s levels are connected by, well, a room. Even odder, the game play shifts from third person to first person when the player is in his room, a first for the series.

When in third person, Silent Hill 4 plays almost like previous games in the series. The first immediate change is that weapon and item selection must occur in real-time: you can no longer pause the game to change weapons. This plays into the second major change: the enemies (which, as always, are scary as hell) have been designed such that it is much more difficult to simply run past them. In the small section I played, simply trying to avoid the enemies did not really work. It is clear that the development team wants Silent Hill 4’s monsters to pose much more of a challenge than enemies in previous games.

However, the single largest change to the series is the lack of a real-time light source. The original Silent Hill pioneered the use of realtime flashlights in horror games, a mechanic that is now almost universally accepted. The series has made a name for itself with its excellent real-time lighting systems, but the sections we saw of Silent Hill 4 had only ambient lighting. Removing the flashlight from the protagonist’s hands has had an enormous effect on the look and feel of the game; instead of everything being very dark, many of the rooms feature muted and foggy lights. Though this change may seem simple, it changed the feel of the game entirely.

Ghost Hunter: Though Ghost Hunter is already out in Europe, it has not quite reached American shores yet. The game is an interesting approach to horror because it revolves around a Ghostbusters-like “trap the monster” mechanic. When you encounter a monster the first thing you must do is shoot it with a special trap. Once the trap is active, you can shoot the monster to try to force it into the trap. This mechanic might be cool, but it seemed fairly lame at the expo. The graphics were nice, however, and control seemed pretty good. I am sure this title will be worth checking out when it eventually arrives in the States.

Resident Evil 4: I have already mentioned that Resident Evil 4 was probably the best-looking game at E3. A simple report cannot really do the game justice. Suffice to say that the game controls very well, feels very different from earlier RE games, and is just a blast to play.

Show Highlights: The high polish of many of the titles on display.
Show Lowlights: The almost complete absence of new game design ideas.
Most Disappointing: The increasing amount of energy being spent on digital breasts instead of fun game design.