The Suffering is very much an American response to the Japanese horror formula. The game has clearly been influenced by the likes of Devil May Cry and Silent Hill 2, but the developers have gone out of their way to break many horror traditions and mix a healthy dose of action into a traditionally slow-paced genre.

Island. Convicted of killing his wife and two children, Torque himself cannot remember the details of the event, and isn’t sure if he is innocent or guilty. It turns out that Carnate Island is a very bad place with a very bad history (everything is wrong with the place, short of being an ancient Indian burial ground), and as Torque arrives things pretty much go to hell. Torque must now battle his way off the island while struggling to remember what really happened to his family.

The Suffering plays like every first-person shooter on a console ever, except that it’s third person (actually, you can play the whole game from the first person perspective if you choose). The dual analog sticks are used for rotation of the camera and movement, and the triggers are used for jumping, firing, and reloading. The control scheme is simple enough, as you rarely need to do much other than move and shoot. There is a targeting reticle, and the game is nice about locking on to enemies once you start shooting at them. I’m terrible at console FPS games because I usually grapple with the controls, but The Suffering was easy and consistent. Though there are a few legitimate puzzles in the game, the amount of puzzle solving in The Suffering is much lower than in most other horror games. Many puzzles are optional, and simply save you from having to battle it out with yet more monsters if you complete them.

The level design in The Suffering is where the game really starts to depart from its Japanese counterparts. The game starts out in Abbot Penitentiary but eventually moves through several other locations, including some very nicely rendered outdoor environments. The prison is by far the scariest of all the locations in the game, but the other areas are still well realized. In typical FPS style, The Suffering rewards players to go out of their way to explore their environments. If you look around even a little bit, you’ll find enough ammo and health to last for the entire game. In keeping with FPS-norms, you are also allowed to save your progress anywhere at any time.

The design of the levels is in The Suffering supplemented by the excellent character design. Though Torque himself is somewhat boring (the typical FPS hero: silent and personality-less), the other characters he meets throughout the adventure are complex and interesting. The voice acting and script is top-notch (though the level of profanity is so excessive it sometimes seems purposeless), which adds a lot to the game experience. The size of the cast is also impressive, and each character has a distinct personality.

The monster design is also quite good. The Suffering is fundamentally about a very bad place manifesting itself, and the monsters designs reflect that philosophy. In addition to looking damn cool and avoiding the zombie pitfall, the monsters in The Suffering also manage to reflect the story: each represents a method of execution used at some point in the prison’s history. The Slayer monsters are by far the coolest looking and best-realized; these spiderly humanoids have had their forearms and calves replaced with blades, and their heads must be held on with an armature because they lack necks. Seeing the monsters move is also a treat, as the animation for them has a lot of personality and style in it (the Slayers, for example, drag their blades along the ground and kick up sparks as they advance on you).

One of the coolest things about The Suffering is that the environment feels alive. Non-interactive cut scenes rarely occur, but there is plenty of story and dialog delivered through interactions with various characters while the game is running (if you shoot someone as they are in the middle of telling you were to go next, they fall over and die and you are on your own). Environmental interaction in The Suffering isn’t limited to dialog either; you’ll often see humans and monsters fighting, or catch a glimpse of some unfortunate prison guard meeting a grisly demise. As you move throughout the various levels, the interactive environments help make it feel like you are not a lone man out to save the world, but a guy with a gun in the middle of a much larger event.

The Suffering was designed to give the player a lot of choices when it comes to this sort of interaction: you can follow a guy offering help or shoot him, choose to free an imprisoned guard or leave him. The levels are designed such that helping some people will allow you to avoid large fights (the NPCs often know shortcuts), but sometimes NPCs will lead you into battles as well. The outcome of the story changes depending on how you make decisions regarding the other characters of the game (that is, you generally always have a choice to kill them or help them), and the levels appear to be balanced such that neither route is easier or harder. The morality system in The Suffering is quite well done, and the story revolving around the protagonist’s blackouts and lack of memory keep the system from feeling awkward.

Speaking of the story line, it is pretty well done. Most of the plot concerns the history of Carnate Island and of Torque himself, but the lush script also helps the narrative remain strong on the events occurring in the game as you play. The story forces the player to question the difference between the evil humans that Torque encounters and the monsters themselves, and uses the aggressive relationship between guards and inmates as a basis for a lot of interesting character development. Since the game is very linear, the story line unfolds at the same pace as the game itself, which feels very natural.

Not everything is peechy-keen in The Suffering, however. The first problem is one of play balancing. The difficulty level is quite low (on Normal Mode, anyway) throughout the game, but every once and a while there will be level segments that require a massive jump in skill to complete. For example, I played the first few hours without dying until I reached a particular section that took me about 25 tries to complete. The same thing happened again few hours later: I’d sailed through the game without trouble until I reached a particular section and became stuck for several hours. The end boss was also difficult to understand (though easy to complete, once the trick was clear). While these balancing missteps are infrequent, they mar the overall quality of the game.

There are other problems, too. As the game progresses, the number of bugs that pop up increases rather dramatically. Most of these problems are collision detection or AI issues, but occasionally you will run into something that requires a restart from a save. Late in the game, for example, an NPC character and I were in the middle of a large fire fight. We got separated, but I could still hear him talking so I knew that he was alive. When the fight ended, the NPC was nowhere to be found. Since the game rewards you for keeping these people alive (and since I needed him to tell me what the heck I should do next), him being gone was a problem. I could hear him talking, but after searching the area I was stumped. Eventually I found him standing by himself on a road that was really, really far away from the location of the fight. I don’t know how he got out there, but if I hadn’t been able to find him I probably would have had to restart from a previous save. Immediately following this segment of the level, the game actually crashed after playing a cut scene, so I had to play the fire fight again anyway (note that this was the only time that the game crashed for me). While most of the bugs in The Suffering are not show-stoppers, they are a bit annoying and can add to the frustration level of the game.

Finally, while The Suffering as a whole lot of fun as an action game, it isn’t very scary. It certainly has its moments (especially in the Prison), and the developers have done an excellent job of creating a scary environment and mood. But Torque is never really in danger because he is a bad-ass who can pop a cap in anything that he might encounter. There are a few pop-out-of-the-dark heart stoppers to be found, but Torque’s prowess as a killing machine prevents the rest of the ambience and the monsters themselves as coming off as particularly scary. And unlike some other horror games, there is little increased tension invoked when the player must switch to a weaker weapon, as all the weapons seem equally powerful. I played most of the game with the dual pistols, as I enjoyed using them and I didn’t see much advantage to the other weapons Torque finds later in the game.

One more note about the play experience: the developers are not kidding about the M for Mature rating The Suffering sports. In addition to rather gratuitous swearing, The Suffering is extremely violent and bloody. If you are the type of player who might not enjoy this level of violence, I suggest you avoid the game.

Overall, The Suffering is a fun, adrenaline-filled, and intelligent game. It is very clearly a reaction to the typically slow pace of Japanese horror games, so if you thought Resident Evil needed fewer keys and more shooting, The Suffering is the game for you. As horror, the game comes off a little weaker than some other horror titles, but this is mostly because the developers have made a conscious decision to make the protagonist an unstoppable killing machine instead of a regular, underpowered Joe. But even without being scary, The Suffering is a lot of fun, and sports some of the best character and level design available in this genre. It’s also a unique blend of third- and first-person game play, and stands out amongst other games in this genre for its innovative approach. 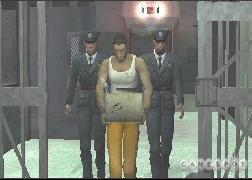 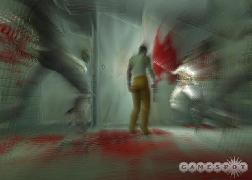 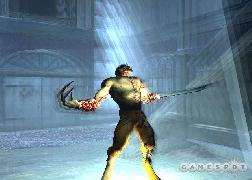 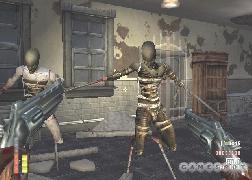 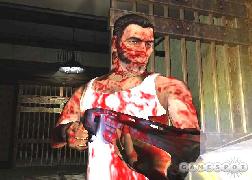 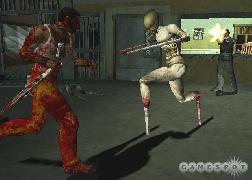 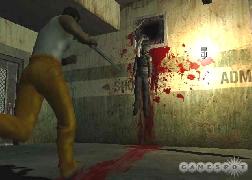