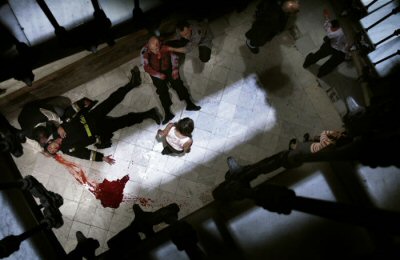 Last year my network of horror-aficionado friends started talking about a hard-to-find Spanish film called REC. The few reviews available were stellar, and I was intrigued with the idea of a Blair Witch-style film about zombies (as I mentioned in my Cloverfield review, the handicam approach to horror seems to be pretty viable). But, as far as I know, REC isn’t available in the US. It was remade this year (one year after the original release; predictably, the remake staring English-speakers is inferior to the original), so maybe now it will come out on DVD, but at the moment it’s a hard film to find in the States.

But not so in Japan! This weekend I sat down with a friend and watched the film, and while it didn’t totally blow me away, I found it to be an extremely capable zombie flick. There’s an immediacy about the movie, partially because it’s all handheld photography but also because events occur in succession faster than the characters are able to respond. A TV crew doing a show about how firefighters spend their evenings find themselves trapped in a small apartment building when the government blocks all of the exits and declares a quarantine. The crew, along with a couple of firefighters and the residents of the building, have no idea why they’ve been sealed off or when they’ll be able to leave. And the old woman upstairs seems to be having some problems; she keeps screaming at the top of her lungs.

Based on this fairly simple premise, REC takes off like a bolt and doesn’t really ever slow down. It’s one revelation after another, and though a few moments are pretty predictable for the most part the characters and the audience figure things out at the same pace. The end is a mixed bag; on the one hand it is one of the most tension-filled scenes in the film, but on the other it veers dangerously close to the trap of trying to explain everything.

This is how horror films should be made. Not that they all have to be shaky handicam productions, just that the formula is simple and the execution excellent. All extraneous bits (monsters, gore, sex scenes) have been removed in service to the central focus of the film: scaring the viewers. Though REC isn’t a perfect horror film, and though it’s not the type of movie that leaves you pondering the plot after the credits roll, I was pretty happy with it. Skip the remake (and even the trailer for the remake–they reveal some key scenes) and find yourself a copy of the DVD.