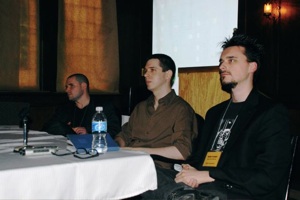 You know, on second thought, I think it will be better if I post my notes with more background. I looked back over my post from last week and it seems like it’s almost meaningless to people other than myself because it lacks so much context. From here on out I’m going to post summaries of what I thought was interesting. If you are interested in a particular point, please ask and I will elaborate.

On the first day of the conference there was a fascinating discussion about how genres are created and defined. Dominic Arsenault and Carl Therrien talked about this topic at length, and I think that it’s a very relevant topic with relationship to horror considering all the arguments discussions that we’ve had about it here.

Arsenault makes the point that genres for games are problematic because there is no single authority. Genre is often defined in terms of a hierarchy of characteristics; GameSpot’s find-by-genre page, for example, sorts everything by pace, then mechanic, then view point, and then theme: Action > Shooter > First-Person > Fantasy. Other lists of game genres (such as this one, this one, and this one) do not agree, and some even contain a meaningless classification like “hybrid.” There is no definitive consensus, new genres are born and die constantly, and most games are combinations of other genres.

He went on to talk about how genres are created when they become necessary. Is it really possible, he wondered, to define a genre of spiky hair sword-wielding protagonists that can then contain both Final Fantasy VII’s Cloud and No More Heros’ Travis? Not really, and the reason is that “genre is not only defined from the elements of a [game], but also from a common cultural consensus” (Andrew Tudor, Theories of Film, 1974). So the genres that stick around are those that people agree upon.

At this point Arsenault had an awesome graph. He plotted the number of usenet posts per month containing the phrase “doom clone” against posts containing the phrase “first person shooter” from about 1990 through 2008. The term “Doom clone” appeared like a bell curve; it starts around 1992 and peaks in 1996, then dies off by 2000. Individual spikes in the usage of the term correlated with releases of games like Duke Nukem. “First person shooter” appearers in 1996 and rockets upwards, surpassing “doom clone” in usage by 1998 and then subsequently rising to much larger usage than “doom clone” ever achieved. By the time that Unreal is released, nobody is calling first person shooters “doom clones.” So, the conclusion is that game genres are not defined by logic, or by a central authority, but by “what we collectively believe it to be.”

Aresnault went on to talk about the separation of thematic and gameplay genres, which an especially important topic for survival horror games. He mentions that “survival horror” seems to be about gameplay (survival) + theme (horror), and is therefore a hybrid of both a thematic and gameplay genre. Survival is pretty easy to define in terms of game terms, but horror is more difficult. It turns out that people have been trying to properly define the horror genre for years, with a number of interesting results. Bruce F. Kawin, for example, separates horror from science fiction by suggesting that the end of the narrative is a genre signifier: horror games end with a “re-establishment of the status quo,” as the world goes back to the way it was before the narrative began, while sci-fi ends in a progression of understanding of the universe rather than a concrete resolution. But that sort of dichotomy does not help us categorize hybrids like Dead Space.

Perhaps, then, we should separate the hybrid into its gameplay and thematic genres. They seem to grow and change in different ways. “Gameplay genres are born from reiterations and successive imitations that aim to better the model, while thematic genres feed on transmedia borrowings with an aesthetic aim.” Aresnault references Fowler (1982) who points out that genre is not just a classification tool, but also a communication tool: it manages expectations. Hans R. Jauss (1978) points out that the “horizon of expectations is made up of first, the player’s knowledge and cognitive schemata, and second, the generic markers that puts the work in place.” (Or something like that; my notes are unclear if this is a direct quote).

Therrien (who referenced this site–thanks!) makes a similar point. Per T. Apperley, the problem with genre is that it doesn’t describe a particular game but rather tries to link it to earlier forms of media. Almost any game play classification we can come up with will have exceptions: rather than a strict definition the concepts involved in game genres are constantly evolving. “Evolution operates with an altogether different rhythm: every work modifies the sum of possible works, each new example alters the species.” (T. Todorov).

Since we’ve had so many discussions on how best to parse the collection of horror games that are cataloged on this site, I found these talks particularly interesting and pertinent. I am still going through my notes but in the next few days I will post about subsequent topics that were covered at the conference. There’s also some pictures online now if you are interested.

7 thoughts on “Thoughts on Genre: Thinking After Dark, Day 1 Part 2”