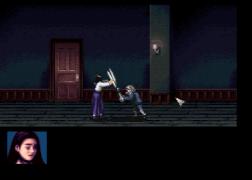 I bet you thought I just wasn’t going to post any more about the Thinking After Dark conference that I attended last month. The truth is that I have pages of notes waiting to be turned into blog posts and I’m running very behind. So, in the interests of brevity, here’s some short thoughts about some of the other talks from the conference.

Clara Fernandez-Vara gave an interesting presentation on the Castlevania series about why it is not a horror game. It clearly uses themes from Dracula, and, as Fernandez-Vara points out, many other classic (and generally unrelated) Western horror tropes like Frankenstein. Yet for some reason it doesn’t come off as a horror game. This talk was an exploration as to why that was the case. Fernandez-Vara’s suggests that Dracula, as a symbol, has been iterated too many times and has lost its original meaning. She points to the beginning of Symphony of the Night in which Dracula is basically reduced to acting like Bowser: he shoots fireballs and eventually turns into some giant generic monster. No biting, mesmerizing, turning into mist; he’s not even killed by a stake through the heart, but instead by a whip. Dracula isn’t scary any more and the developers had to turn him into something else to make him a threatening boss.

Fernandez-Vara’s theory is that this reliance and modification of a worn-out trope empowers the player; by using Dracula (the “satanic lord” version; there are many others) as an antagonist, the designers are giving the player a leg up on the competition: we already know all about Dracula and all that’s left is to go into his castle and take him out. Fernandez-Vara also points out that in Symphony of the Night, the protagonist Alucard actually gains Dracula’s traditional powers, which ends up making him even more powerful.

Alexis Blanchet presented a bunch of data related to some fascinating research he has been performing for the last three years. He is trying to catalog and categorize all games based on films ever made, and his database appears to be fantastically complete. This talk was in French but I think you can get a lot out of just looking at some of his graphs. Rather than reproduce them here, check out his web site and blog post about his talk.

Jonathan Lessard’s talk was about Lovecraft’s influence on the adventure game genre. It turns out that there are a bunch of horror-adventure games (mostly for the PC) that use Lovecraftian themes or are directly based on his work. Lessard wanted to know what the appeal was specifically with regards to adventure game translations. Lessard points out that the license is practical because it is not under copyright and the Lovecraft name is fairly well-known (though it can’t compare to, say, Agatha Christie). There are also structural compatibilities between Lovecraft’s stories and the adventure mold: Lovecraft stories are often about researchers or investigators setting out to find hidden truth, which maps very well to adventure games. Adventure games are indirect and contextual, which is a better fit for Lovecraft than verb-oriented action games (not a lot of running and jumping in Lovecraft’s stories). So the mode of play and general format of adventure games seems to be a snug fit.

However, Lessard points out that most of these games fail to be scary because eventually the game-related goals come into conflict with Lovecraftian norms. Lovecraft’s “cosmic fear” concept is really hard to describe visually; it’s not about things popping out of the dark or gore. Instead, it is about knowledge leading one into the darkness rather than to reason. But in an adventure game, discovery of truth is a reward and not a method of alienation, so that same psychological evolution of the character is difficult to achieve. It’s also hard to get the characters in these games to sufficiently emote, and many end with the triumph over evil, which is hardly Lovecraftian. So most of these games are not very scary. Lessard points out one major exception: a game called Darkness Within: In Pursuit of Loath Nolder, which apparently follows the Lovecraftian narrative flow to a T. Gabrial Knight also gets a mention for its attention to cosmic fear. So the format is capable of hosting Lovecraft in a very authentic way, but it does not happen very often.

Another interesting talk was Matthew Weise’s discussion of “rules of horror.” His idea is that it might be possible to make horror games by translating the rules and tropes from specific types of horror movies directly to game play. As an example he talked exclusively about Clock Tower: The First Fear (though I think that the focus on this game was forced by the very short time limit for presentations). Clock Tower is, Weise points out, a very authentic translation of the “stalker” type of horror film (Halloween, etc). The protagonist is clearly a Final Girl. She fits the formal definition (Clover’s model) to a T, and the game can be seen as a simulation of the stalker film genre. It is one of the few games to show the protagonist’s face up close so you can see when she is frightened, and this feature, Weise argues, is required by the genre. Weise suggests that one way to adapt horror games from films is to see the genre rules of the film as game systems instead of just lifting the narrative. If you watched the film, would you be better prepared to play the game? If so, that would indicate that the game play itself is based on rules and systems defined by the film.

And that’s all I have time for today. I have at least two more posts on the conference to write, so please stay tuned.

15 thoughts on “Thinking After Dark: Tidbits”