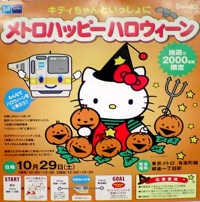 It’s just not the same.

As you’ve probably noticed I’ve had a hard time lately keeping up with this blog. Actually, the problem is that I just haven’t had much time to play games, and without games as input it’s pretty hard to generate consistent output. Right now I’m sitting in a hotel in Sapporo on the end of a business trip; work has been so hectic lately that by the time I get home, eat dinner, put the kid to bed, and am ready to play games, my first inclination is to sleep.

But it’s Halloween for crying out loud. I can’t pass up a post on Halloween. Plus, there’s a ton of info that’s come up in the last several months that I meant to post about and just never got to it. So, in lieu of real content, here’s a summary of some of the noteworthy horror-goings-on that have happened lately.

Here in Japan Halloween pretty much means lots of orange and black decorations on store windows and a sudden abundance of jack-o-lantern flower pots for sale. Horror is a summer genre here, so while this country loves horror media and produces a lot of highly scary stuff, Halloween just isn’t the same. So here’s hoping that you guys are enjoying the holiday.