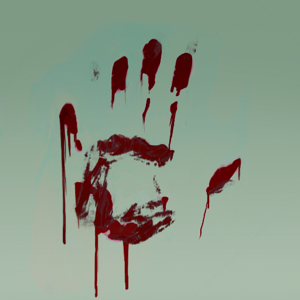 A couple of posts back I mentioned End Night, the new horror game for iPad. The game is out today and you can pick it up for $2.99. There’s also a pretty cool trailer if you want to get an idea of what its like.

The setup is that some sort of zombie plague has overrun the town and you, the only apparent survivor, are working on a vaccine. Your house has been converted to a lab where you can process samples collected around town to make experimental serums. Most of the game, then, is venturing out of your compound and into the infected town to collect more samples. The game is rendered in nice 3D from a top-down, 3/4 overhead perspective, which looks great but doesn’t allow you to see very far in any direction. You move your character with a virtual analog stick and fire with an auto-aiming fire button. There layout of the town is always the same but the location of samples and other items is randomized, so each play through is a little bit different.

Once you set foot outside of your house the zombies (or whatever they are–the game doesn’t spend much time on exposition) will attack from all directions. They sprint at you like the Crimson Heads in the Resident Evil GameCube remake, and since they can run faster than you can, shooting them is pretty much the only option. You make your way to a place where you can find another sample, usually a house or store or something like that, then quickly search it for items and collect the sample while keeping the never-ending waves of zombies at bay. Once the sample is collected you can run back to your house to process it into a serum. Some serums require multiple samples before you can test them out.

End Night is very clearly an attempt to take a classic horror game and repackage it in a way that makes it appropriate for a mobile device like an iPad. In my previous post I lumped it in with casual games because it’s designed to be accessible, but don’t take that to mean that the game is simple or easy. The controls are simple and the goal is straightforward, but there is tons of stuff going on in End Night.

First of all, there are a whole lot of stats to manage: your character has armor and health, he can get tired, if he has open wounds they can become infected (and must be cleaned off), he sometimes feels remorse for his actions, and of course he has to manage limited ammo and health availability. Almost all of these stats boil down to “find an specific object in the world and use it,” but it’s still a much more complicated setup than you might expect to see on this platform. It sort of reminds me of the crazy stat dependency system in Illbleed, though End Night is a better game. Some of the mechanics, such as washing infected blood off, are quite clever.

End Night also shows its influences when it comes to the actual combat. Guns auto-aim but may take several shots to bring an enemy down. Health and ammo are few and far between, 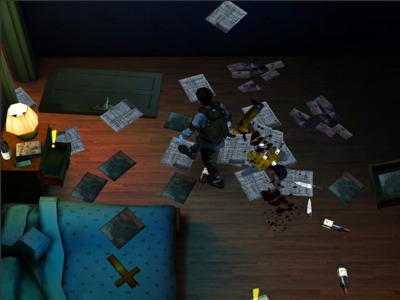 and producing serums requires that you collect extra vials, which are also spread out over the map. The only melee weapon is an axe, and it’s been designed to be hard to use. Clearly, End Night wants combat to be hard and risky; the game is designed to make the player want to avoid combat by whatever means necessary. More than anything else, this gives the game a bit of an old-school horror vibe.

But what’s most interesting to me is the way that the old school formula is mixed with decidedly new school mechanics. This is an iPad game, and it’s been designed with mobile platforms in mind. To that end, the entire game takes place (as far as I can tell) in a single area; you play the same patch of town over and over again. When you die you must start all over, but each restart gives you the chance to power up your character a little bit more. This keeps the game interesting even when the mechanics start to wear thin; even a failed run has value because any points you collected can be fed back into the power up system. It also helps that the placement of items on the map is randomized with each restart.

End Night may be a new school horror game, but it’s one that knows its roots. Part of what made older horror games work was intense difficulty, which End Night also has in spades. The game is tough–each time you venture out of doors it’s likely that you will not survive to return. Part of the difficulty comes from the severe lack of ammo and health, but some of it is also a product of the control scheme. The virtual analog stick provides tight control but my thumb kept slipping off of it. After a while the friction on my fingers started to make them hurt. The shoot button is much better, though sometimes I had trouble picking up items that are scattered about.

I have some other miscellaneous nit picks with the title. The play sessions can get pretty long for a mobile game. Powering up is pretty easy (my character is almost completely powered up after four or five runs) but doesn’t seem to change much. There’s a little too much going on with all the various stat management. Running out of ammo equates to instant death. The game is super dark and can’t be played in any sort of direct light. Minor stuff.

Finally, End Night sports some interesting visual storytelling. There’s almost no setup to the game itself, but as you play things begin to subtly change. After collecting the third vial you start to notice messages, apparently left by the zombies, that casts doubt over your actions. I wasn’t able to get far enough in the game to see where the story goes (like I said, it’s hard), but the technique is simple and it seems quite effective.

End Night is not a traditional horror game, but it’s clearly an attempt at adapting traditional horror mechanics to a casual mobile device. There are very few horror games for mobile platforms at the moment (Aftermath and Dark Meadow are as close as it gets), and none of them have the horror pedigree of End Night. The gameplay is very simple, the mechanics are detailed, the challenge is high, and though there are a few rough spots I think it’s pretty fun.