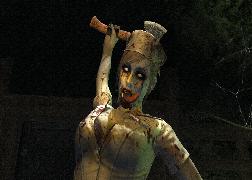 I bought a Kinect a while back because I wanted to play Happy Action Theater with my daughter, as well as Once Upon A Monster. Both games are pretty fun, and they use the Kinect in ways that work. The other Kinect games I’ve played, like the Wii Sports knockoff Kinect Adventures, are all universally terrible. The controls don’t work, or they don’t work well enough, or you just can’t get into the damn game because the UI is impossible to navigate while flailing your hands like an idiot in the space in front of your TV. My daughter wanted to use a different avatar than the boy character that Kinect Adventures auto selected for her, but the device wouldn’t read her movements correctly, wouldn’t allow me to stand in for her to make a selection (it tries to switch players using facial recognition or something), and also wouldn’t allow me to use the regular controller to navigate the UI for her. After she became frustrated to the point of tears we turned the damn thing off, and since then the Kinect has sat, inactive and unmoving, at the top of my TV (we play Wii Sports, which she can control easily, instead).

But you know, once you buy the thing, you start to think about using it every once in a while. This is the train of thought that eventually led to the purchase of Rise of Nightmares, an event which I almost immediately regretted. If you haven’t heard, Rise of Nightmares is a first person Kinect-based horror game in which you punch the lights out of zombies while standing in your living room. Here’s a pretty funny video to give you an idea of what playing this atrocity of a game is like.

Anyway, though I’m not very proud to say it, I completed Rise of Nightmares and wrote a short critique.

3 thoughts on “Rise of Nightmares”