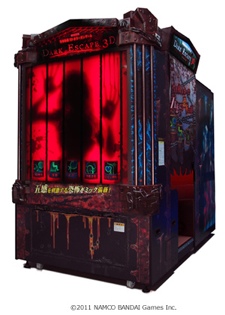 Every once in a while I get an angry message asking me why I omit PC games from this site, or why I fail to include visual novels and light gun shooters. The reason is mostly logistic: I have a limited capacity to buy and play games and so I need to contain my research in some way to make the project feasible. When I look at the number of PC horror games that have ever been made, and the lengthy steps required to purchase and run these games, it is an easy decision to avoid them purely on cost/benefit grounds. The same can be said for visual novels: the form is slow, there are a ton of them, and I don’t expect to learn a whole lot about how horror games can be made by reading text set against static images (even when the text is really good!).

Light gun games are also omitted for this reason. In my youth I spent inordinate amounts of money on Lethal Enforcers, Terminator 2, Time Crisis, and House of the Dead, and even now I enjoy a good light gun shooter every now and then. But these games are rarely designed to actually scare you–they are almost always designed to be challenging target practice systems wrapped up in some arbitrary contextual skin. You can shoot vampires in Vampire Night, and zombies in House of the Dead, but neither game was designed to actually frighten you. Even the Silent Hill arcade shooter is just the dispatching of zombie nurses over and over with some fog in the background and film grain in the fore.

There are, however, exceptions to every rule, and when it comes to light gun shooters, the exception seems to be a game called Dark Escape 3D. It’s a big arcade cabinet, the kind where you go in and sit down, and it sports all kinds of technical features: a vibrating seat, 3D screen (complete with glasses tethered to the cabinet), 5.1 surround sound, and even a heart rate monitor built into the handle of the turret-like guns mounted in front of the screen. If you believe the marketing, the game is designed not only to scare you but to adjust your score depending on how scared you become.

I located this behemoth at the local arcade while visiting Japan on holiday. It cost about $2 for one play and $1 for each continue, but I couldn’t pass it up. I was, unfortunately, disappointed.

It’s not that Dark Escape 3D is a bad game. As shooters go, I’d say it’s fairly mediocre–there are a lot of cheap hits and the targeting reticle is often deactivated, which is pretty annoying. The visuals seem designed to show off the 3D effect rather than present the game. Though the game looks nice, the design is nowhere near the quality of say, Time Crisis 2 or House of the Dead 2. But, you know, it’s a shooter: you point the gun at stuff and pull the trigger and that’s about all there is to it. So it’s not bad.

And surprisingly, it actually managed to pull off a pretty good scare. I didn’t expect it to get the drop on me, but early in the game there is 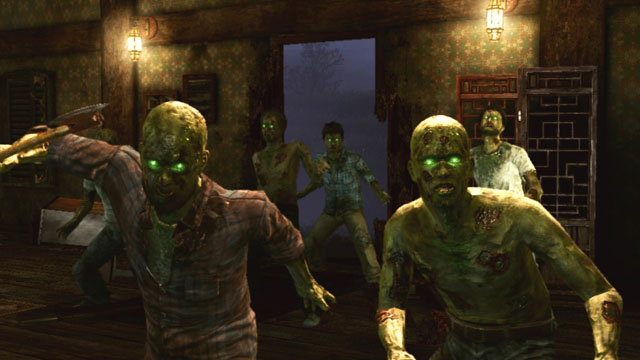 These guys? You shoot them.

a moment when a pop-out scare fires and the sound system wails and the vibrating seat gives you a good bump, and when that happened the heart rate monitor told me that mine had increased by 10 beats per second. I’m dubious about the 3D display but the force feedback in the seat and the powerful sound system actually delivered a pretty good punch (proving once again that horror really is all about the sound).

The problem is, the effect was significantly diminished when the game tried it again a minute later. By the third pop-out scare my heart rate, as reported by the game, was holding steady, and I was already becoming bored. Though it tries to be scary, Dark Escape 3D is just another light gun shooter: zombies come out and you shoot them in the head before they can scrape you. Then the camera moves and more zombies come out and you shoot them. After the third of fourth zombie face has jumped out of nowhere to fill your screen and scream bloody murder, the pattern is pretty clear; you shoot it in the head and move on.

Dark Escape 3D has a lot of tools at its disposal, but all it does with them is pop-out scares. Just one after another, over and over. I was hoping the heart rate monitor would be put to some game play use (e.g. you could detect when the player had begun to relax and schedule a pop-out scare at that time), but unfortunately it seems relegated to a HUD element and some worthless score bonus at the end of a stage. The pop-out scare is a highly effective–and totally legitimate–way to scare people, but it only works when they aren’t expecting it. It’s best used sparingly, in small doses. There’s a reason that everybody remembers the zombie dogs crashing through the window in Resident Evil: it’s the first pop-out moment in the game and so it was a legitimately terrifying event. Dark Escape 3D doesn’t understand this. It just hits you with a pop-out zombie and then another and then another. The power of the scare is lost after the first few.

The problem, I guess, is that even with near-perfect environmental controls, the developers of Dark Escape 3D are still stuck with the fact that they are making an arcade game. They need to kill the player off every three minutes or so to ensure a steady stream of quarters. The market for arcade games is drying up fast in Japan–the spot where I found Dark Escape used to be a haven for weird games and is now entirely shooters, driving games, UFO catchers, and virtual horse racing games. So given those constraints there is little choice but to make a shooter. And because they made a shooter, all the tech at their disposal ended up being wasted on a petty gimmick.

15 minutes later and $5 poorer, I stepped out of the cabinet with a reaffirmed belief that I am not missing much by omitting light gun games from the Quest. The format is simply not expressive enough to actually experiment with interesting emotional mechanics.