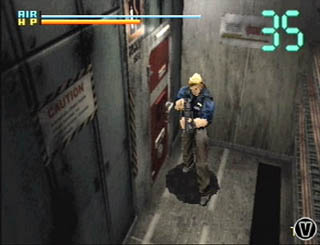 When will people learn that strange microbes and underwater research stations don’t mix? Deep Fear is a well-executed Resident Evil clone for the Sega Saturn. While it was only released in Japan and Europe, the menus and all of the voice acting are in English. There is also a very complete FAQ for it over at GameFaqs.com. Anyone who enjoyed the original Resident Evil will like this game.
Deep Fear’s greatest strength is its presentation. The top notch music is provided by veteran composer Kenji Kawai (Patlabor, Ghost in the Shell etc.). The voice acting is superior by survival horror standards, and the plot is an interesting tale of sickness, corruption, and tragedy. The only drawback to this game is the lack of extra features and low replay value. Still, it is the best horror game on the Saturn and deserves your time. It is fairly common and shouldn’t cost more than $15.

The Note
Playstation
Japan or Europe (NTSC or PAL, PAL recommended for game fixes and language)

Like Hellnight, The Note started as a Japan-only release before being translated and edited for the European market. The final product is a little more choppy than the original version but it is infinitely more playable. The menus are selectable in a number of Western languages, the difficulty was reduced and the control was improved. God bless strafing. The Note is not a great game. The voice acting is terrible and the first person gameplay lacks targeting crosshairs. Still, it is a unique experience. Monsters are kept at bay by light, so to prevent zombie respawning you must always maintain a good supply of matches and oil to keep the fires burning. My only other tip would be to lie on the brightness test at the start of the game. The default setting is far too dark. Being eaten by unseen wolves in not fun! The Note is a good game for the fan of the unusual who gets a kick out of exploration. The Note is rare but cheap; keep an eye out for it and you should get it for $15 to $20. 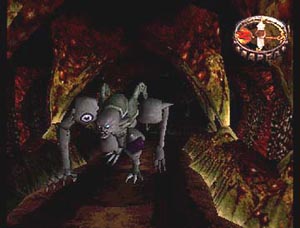 Hellnight may be the best reason to learn how to import PAL PS One games, as there is nothing quite like it in the world. Hellnight is the European name for Atlus’ Dark Messiah, which unfortunately never saw a North American release. The game is a first person adventure that begins as you, a nameless everyman, are chased onto a subway train by bizarre cult members. From there you run for your life, relentlessly pursued by an unkillable beast. You will make allies, solve problems and find keys, but the over-riding goal in Hellnight is to escape from the strange underground world you are trapped in before you are destroyed by the beast.

Though you can complete the game without any allies, many of the paths in the game will are determined by who you choose for your partners and how long they survive. Will you keep Naomi, a schoolgirl with the uncanny ability to sense of the monster’s location? How about the crazed serial killer Kamiya, the stoic soldier Ivanoff, or the machine gun toting reporter Renee? It is unlikely any two sessions of Hellnight will turn out the same.

Hellnight is challenging but fair. The developers are good at throwing you a bone just when you feel the most alone and doomed. Though Hellnight will not please fans of graphics and glitz, those who favor a good story and great game design will really enjoy it. Hellnight is uncommon to rare. It shouldn’t cost you more than $20. Look for it in the British and Australian Ebay sites.

For far too long this game has been denied its due. The Twilight Syndrome series was started by Human (creators of the Clock Tower series) in the mid nineties. By my count there have been six Syndrome titles, but Saikai is the best and the only one worth importing. The others are plagued with heavy text and have serious pacing issues. I do not know a lot of Japanese beyond yes and no, so the true story of this game is a bit of a mystery to me. But I can keep track of names and read images and emotion well enough to get a lot of enjoyment out of this game.

A group of teenagers in a boarding school meddle with the supernatural and are gifted with the Twilight Syndrome, the ability to hear and see the dead. From this point your group is sent off to solve a variety of ghostly matters in a series of chapters. As an added bonus there is an exploration mode, which I think is the best part of the game. It allows Yuuri, the main character, to check out the dark corners of her school at night and get important clues for the main adventures. Armed with a camera, the best plan is to wander around until you find spirits willing to speak, then snap some pictures of the area. After you are done exploring you can develop your film and get some kick ass ghost pictures.

The more Japanese you understand the better this game will be. Saikai was published by Spike at least twice and is common in Japan. The only problem is finding a vendor that carries it. The demand is currently very low in the import market. $10 or $15 seems to be the going rate. Download a save file for Twilight Syndrome.

Once upon a time there was a company called Cryo Interactive. They made games that sucked. Even though their games were awful, Cryo often included promising and unique features. Virus is a Cryo game based off of a movie and comic book license. It borrows a lot from Resident Evil but is of much lower quality. However, I still feel compelled to recommend it because of its unique premise and cheesy horror plot.

The biggest problem with Virus that it is nearly unplayable without cheat codes. This could have been remedied by 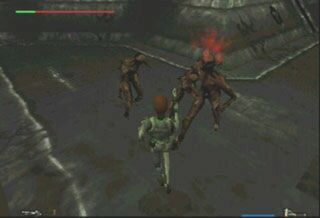 Sadly, there was apparently no one at Cryo willing to listen to play testers. My proposed fixes might have made the game easier, but people could still enjoy it as good horror cheese. So in light of all these problems, my suggestion is to cheat. Cheat, and feel no shame in doing so, because cheating actually improves the quality of this game.

Virus’ strength is its silly story and straight up cyber-zombie blasting. The “puzzles” involve finding the next green button that will open a locked door. The game music is quite good and haunting, and Cryo did a good job with the CG movies and music. Playing the game on a North American console will likely cause music playback problems, so just rip the red book audio and listen to it on a nearby CD player.

I hear that Virus is extremely cheap second hand in Europe. Pay less than $10 for it. It is common but vendors might not be carrying it all the time.

Go on to Page 3, Other Import Games