Illbleed is hands-down the weirdest game I’ve played for this Quest. Everything about it is strange: the concept, the story, the presentation, the levels, even the control scheme is non-standard. This strangeness imparts a lot of originality to the game, but many of Illbleed’s innovations are overshadowed by poor game design.

Illbleed comes from the 1980’s school of horror design. In the vein of films like Child’s Play, Illbleed mixes humor with horror and doesn’t take itself too seriously. It’s an uncommon approach for horror video games, which typically try to be more realistic and serious. Instead of zombies or Pyramid Head, Illbleed is full of killer crash test dummies, giant heads with spider legs, malicious trees, axe men, and even killer monkeys. Like the ’80s films it was influenced by, Illbleed relies on sudden pop-out startle moments, gore, and even some tame nudity to provide entertainment. If every campy, over–the–top horror film could be condensed into a game, it would probably look a lot like Illbleed.

That said, Illbleed isn’t very scary. Its main game mechanic centers around second-guessing when things will pop out at you (more on that in a minute), and the environments your character traverses through, while gory, are nothing more than set pieces. There’s no attempt to use level design, enemy design, or weapon design to promote fear here: Illbleed has one trick and it knows how to play it well.

However, it is worth noting that a couple of moments in the game did make my skin crawl. These were mostly story moments, and the rest of the game is so straight forward that it is hard to tell if the disturbing ones were intentionally made that way. Early in the game, for example, you meet another innocent human being. The game requires you to kill this person to progress, even though it displays the character in a sympathetic light. Forcing your avatar to bash an innocent person’s head in sort of reminds me of Shadow of the Colossus: you’re following the game rules by rote, but it feels like you may have just stepped off the moral path. Unfortunately, these sorts of disturbing moments are extremely rare (there are maybe two or three in the entire game), and the rest of the content is pretty silly.

There’s some story in Illbleed, but it’s really irrelevant. The game takes place at a killer theme park, where each attraction can easily result in death. The attractions are set up like movie theaters, and each one contains a different story and setting. Visitors to the park are told that they will be paid $100 million if they can make it through the park alive. Your character shows up at the park looking for her missing friends, but eventually you just go to each attraction because you want to be finished with the game once and for all.

The main game play mechanic in Illbleed is trap detection and avoidance. Each level is filled with traps, invisible hot spots that can attack you if they are not disarmed. A typical trap might consist of knives flying out at the player, or a screaming skull appearing out of nowhere to scare you. When a trap is near, one the character’s senses (a meter on the HUD) will flare up, warning you that something dangerous is close by. Using a first-person device called the Horror Monitor (which isn’t all that different from the visor in Carrier, although way less sucky), you can zoom in on suspicious locations and disarm traps by selecting them. Since the traps themselves are invisible, and since using the Horror Monitor uses up a resource (adrenaline), you must carefully select areas to try to disarm. If you run through the level, your sense meter will often flare up too late to avoid the trap, so the game rewards you for walking and being cautious.

There are some other mechanics that are less interesting. Illbleed has a pretty bad combat system, but what is unusual about it is that you can leave almost any fight at will by escaping via helicopter. No matter how far underground you are, you can always run to a special spot on the floor and call for an escape ladder. In fact, the only reason to fight enemies at all is to get adrenaline from them when you win. There’s also a pretty standard item selection system, and the controls will be familiar to anyone who’s played a third person game before.

Illbleed’s game play fails for two reasons: ease of failure and inconsistent rules. There are many, many ways to die in Illbleed, and there are comparatively few ways to survive. You must constantly manage a complex web of resources: health, bleeding, heart rate, adrenaline, your senses, and even the way you move. The game is set up so that each of these resources can cause you to fail. If you run out of adrenaline, you can’t use the Horror Monitor, which means you can’t find traps, which, when you run into them, will increase your heart rate, cause you damage, and increase your bleeding meter. If your heart rate goes too high, you can faint, leaving you vulnerable to enemies. If your bleeding meter goes to high, you die. Even if your bleeding meter isn’t too high, it causes you damage above a certain threshold, which will also eventually cause you to die. If you run instead of walk, your bleeding meter can increase and your heart rate will not slow. I made this chart describing the interactions between all of these resources (red lines are detrimental to the player, blue are helpful):

Basically, if any of these resources leaves the normal range, you can die. There are items to help cure each of these resources, but you need a different item for each type, and often you can only find items for problems you don’t currently have. Even worse, some items will help some resources and simultaneously aggravate others. Most of the problems can be mitigated by standing around or walking slowly (your heart rate and bleeding rate decrease if you don’t move), but if you do this too much you’ll fail to complete the level in the alloted time limit, and your reward money will be docked. Besides, who wants to just stand around for ten minutes waiting for your heart rate to go down?

Just when you think you’ve learned all these rules, Illbleed changes them on you. In some games it is nice to have a variety of challenges for the player, but in Illbleed the rule changes are not communicated to you, which is really frustrating. For example, the first level is fairly hard because you are getting the hang of the resource maintenance and trap disarming system. But once you beat it, the second level is completely different: there are no traps and the strategy you just learned in the previous level isn’t applicable. In a later level they take away all of your items, weapons, and horror monitor and force you to move slowly through a maze. These sorts of changes are the worst in the early levels because you haven’t really had time to master the game yet, and are aggravated by extremely infrequent save points. The later levels follow the “normal” game mechanics and are actually a lot more straight-forward, but just getting to those levels can be an exercise in frustration.

I will now describe the absolute worst part of Illbleed. At one point you are asked to play a jump rope mini game in order to progress. The idea is simple: the jump rope is spun faster and faster and you just have to jump over it ten times without touching the rope itself. This should have been an easy little diversion from the regular game play, but instead it was easily the most difficult moment of the entire game. The problem with this mini game is that there is a delay between when you press the jump button and when the character actually leaves the ground. This is a mortal sin in jumping games: in any sort of platformer worth its salt, you’ll find that the character leaves the ground the very instant that the jump button is depressed. But in Illbleed, there is a delay that makes the mini game really, really hard. On top of that, the game is confusing because it mysteriously switches the jump button from X to A. Changing a button in the middle of the game is another mortal sin. Finally, every time you touch the rope you must watch your character die, restart, and then skip through a cut scene to get back to the mini game. This mini game probably took me about 80 tries to complete, and it is one of the worst examples of bad game design that I’ve ever seen. This moment alone knocked a point off of the overall score of the game.

So what does Illbleed do right? Well, the aforementioned campy horror theme is present throughout, and it’s pretty well executed. There are ads for fake movies all over, and most of them are pretty hilarious. The game’s influences are usually pretty clear, and they try to hit just about every note that they can on the 1980’s horror movie scale. They also make humorous parodies of other Sega properties throughout the game, including a hedgehog-like boss who rolls up into a ball and loses rings when damaged.

I also really liked how Illbleed is self-referential. In the context of the game, the character is trying to make her way through a killer amusement park, so every monster she sees and every trap she disarms is, presumably, being controlled behind the scenes by the park operators. Illbleed takes advantage of that idea, and often allows the characters to peak backstage and see the workers readying the next area. At one point you walk through a storage room containing boxes for each of the monsters you have battled so far, as they are supposed to be just robots waiting to be deployed for the next visitor. It is very rare for games to “break the forth wall” and refer to themselves as a game (Metal Gear Solid is the most famous example), but Illbleed gets away with it by making the theme park a game-within-a-game. I’d like to see that done again somehow, in a context that is more fun to play.

Finally, Illbleed’s graphics are outstanding for the Dreamcast. The characters are all lit well, the textures are very high resolution, there are shadows, etc. Though the art style and level design doesn’t really lend itself to visually impressive scenes, the graphics tech in Illbleed is some of the best I’ve seen on Dreamcast.

Illbleed is a truly weird game. It has a lot of style and tries really hard to be like the horror films that influenced it. It’s got great graphics and an uncommon theme. The problem is that despite all this originality, it really isn’t all that fun to play. If you are looking for a throughly strange game to play on Dreamcast and you are willing to put up with some frustrating game play, Illbleed is worth checking out. If not, skip it. 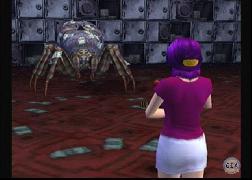 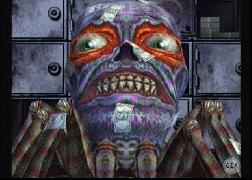 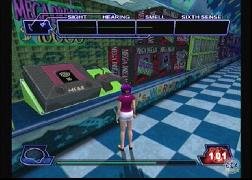 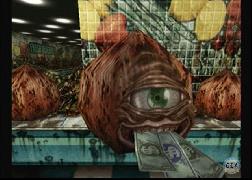 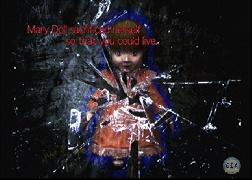 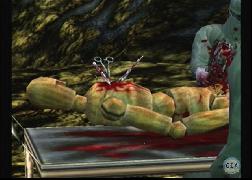 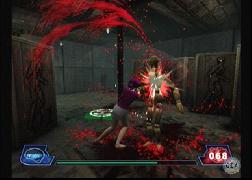