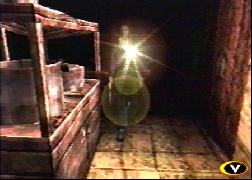 Most 3D games at the time avoided shots like this and kept the camera behind the player.

In part 1 of this series* I discussed how horror games differed in approach compared to most other third person genres in the transition from 2D to 3D graphics. When we left off, I was describing how the scheme used by games like Resident Evil allowed developers to use dramatically composed shots by making movement relative to the protagonist’s facing direction rather than relative to the camera’s view. After Resident Evil shipped a huge number of copycat games flooded the market, and most of them simply copied the control scheme and camera system from the seminal horror game verbatim. Even with the release of the DualShock in 1997 in Japan and 1998 in the US, the in-game controls for 3rd person horror games stayed constant for a number of years (with one notable exception). However, two games in particular bucked this trend and showed that the concepts proven by Resident Evil could be applied to other game formats.

In 1999 the release of Silent Hill ushered in change on many game design fronts. In addition to being one of the first console games to use complex streaming and lighting systems, Silent Hill also showed that character-centric controls could be used with moving cameras in fully 3D worlds. Like Resident Evil and Alone in the Dark, the protagonist in Silent Hill moves independently of the camera: left and right rotate the character in place, while up causes him to run in the direction that he is currently facing. Unlike Resident Evil, however, Silent Hill uses a combination of fixed and moving cameras: the camera is able to cut to dramatic angles as well as follow the player through the foggy streets of the deserted resort town for which the game is named. In fact, the decoupling of movement and camera position made Silent Hill’s camera model considerably more complex than other fully 3D third person games at the time; games like Tomb Raider kept the camera locked behind the player, while Silent Hill was able to move the view in far more interesting ways.

Silent Hill showed that the power of shot composition and dramatic lighting proven by Resident Evil could be applied to games without pre-rendered backgrounds. The game was a technological showcase at the time, but it also proved an important point: that camera movement, not just camera placement, is one of the key elements to building tension in games. Silent Hill also showed that the Resident Evil control scheme could work in true 3D, though it was no easier to learn for new users than before. In fact, the “tank controls” system would remain a popular choice for developers for a few more years, even though a better alternative had been invented a year before Silent Hill’s release. 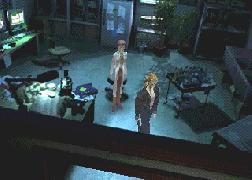 control scheme is Parasite Eve, released in 1998. Parasite Eve used the same basic control setup as Resident Evil: fixed cameras that may cut at any time without interrupting the player’s movement. But despite the similar camera design, the developers at Square USA came up with a key innovation that allowed them to employ a much more user-friendly control system. Though this change would go unnoticed for several years, it eventually became the standard way to make third person controls with camera cuts work, and remains a standard to this day.

Unlike Resident Evil, Parasite Eve uses camera-centric controls. That means that it works similarly to Tomb Raider and Mario 64 in that the definition of “forward” is defined by the camera rather than by the character. But wait, you exclaim, in the last post you said that camera-centric controls are incompatible with fixed camera systems and never the twain shall meet! I’m glad you’ve been paying attention, but what Square USA did with Parasite Eve effectively solved the quandary of mixing camera-based controls into a system where the camera moves unpredictably. The key change that Square made is simply to only allow the definition of “forward” to change when the player is not pressing a button on the controller. That is, if the player runs to the edge of an area and causes a camera cut, the direction they are currently holding will still move them forward as long as they hold it down. When they let go of the D-Pad or analog stick, the definition of forward is reset to match the current camera view. This way the player can continue to run forward through any number of camera cuts without having to suffer through the brain damage caused by character-centric controls.

Though it may have gone mostly unnoticed at first, the Parasite Eve solution to 3D controls with fixed cameras would eventually become the absolute standard. The system was duplicated and perfected by Capcom’s Devil May Cry in 2001, and has since been used in almost every subsequent horror game utilizing fixed cameras to date. In fact, the only recent games that preserved the pre-Parasite Eve control system are those from the Resident Evil series, notably Resident Evil 0 and the Resident Evil remake. It’s not as if these games have been stuck in the past, however: almost all of the good horror games for the PS2 generation have had something interesting to add to the mix. In the final post in this series, I’ll take a look at how recent games have tried to further improve upon Silent Hill’s camera system and the Parasite Eve control scheme.

*Incidentally, the post ID for part 1 is also the name of an early but highly influential CPU. How apt for a post about technical evolution!