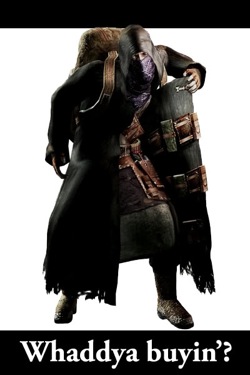 As good as it gets?

Problem: Balancing game difficulty across ten or twenty hours of play in a way that enables all types of gamers to enjoy your game is hard. Games that get too hard will be frustrating, but games that are too easy are boring. There’s a sweet spot between those two that makes a perfect game, but the trick is that the entire scale changes from player to player. If you’re a game designer, one of your primary challenges is to ensure that your players don’t get bored and don’t run into difficulty cliffs.

Solution: Let the player buy their way out of difficult situations. Rather than just relying on maximum gaming prowess, you can let the player who is bored or the player that isn’t quite good enough to side-step a particular challenge by putting in effort somewhere else. Very often in horror games lately, this system takes the form of an in-game store.

For example, consider Devil May Cry. That game very quickly sizes you up as a player; you’re either hardcore or casual, and by the end of the first chapter the game knows which and can taylor the rest of the experience accordingly. It does this by throwing a huge difficulty spike at you in the form of the very first boss. The path from start to that first boss, which is a sort of giant lava spider thing, is pretty smooth and easy; there’s only two different types of enemies to dispatch and Dante is such a badass that just about any player should be able to make it. The boss, however, is incredibly difficult for a first-time player. Everybody I know who played Devil May Cry had the experience of hitting a brick wall when they faced the first boss.

The genius of this system is that there are basically three ways to get passed the boss, and depending on which you choose the game can safely label you as hardcore or casual. The first way is just to be a badass player from the first level–this clearly marks you as hardcore. The second way is to enable the easy mode when prompted; after you beat the first couple of rooms the game lets you know that you can tone the difficulty down if you choose. Players who do this are not in it for the challenge (and aren’t putting their prides on the line), so it’s safe to assume that they want a more casual experience.

The third way is to power up Dante before facing the boss by beating an inordinate number of enemies. It’s this third method which is key to identifying the type of player who is in it for the challenge but isn’t necessarily interested in having to do every single challenge flawlessly. By killing enemies you can collect orbs, which you can use to purchase power-ups at an in-game store (you also have the chance to power-up Dante between levels). For the first boss, a particular powerup–“Air Raid”–is extremely handy. But to buy Air Raid you need to fight a lot more bad guys than you would normally face if just progressing through the game normally. A player that does this is intentionally grinding; he leaves rooms and then re-enters them so that the enemies will respawn and he can fight them again. This kind of player is also encouraged to graduate into the flawless hardcore player by rewarding him when he uses variety in his combo strings (which Devil May Cry links to “style points”). The happy-to-grind player is also hardcore; they don’t want any hand holding but are willing to work around a particularly hard section by putting in extra play in other sections. The game store is key to capturing this type of game.

This system actually works very well, which is why tons of games use it now. God of War, Ninja Gaiden and other brawlers have similar systems, but so does Resident Evil 4, Resident Evil 5, and Dead Space. The implementation in each of these last three examples varies, but the intent is the same: to give players a way to explicitly control the difficulty of the game without making them feel like they are being given a handicap. It also gives these games a way to reward exploration.

The problem with the in-game store is that, when it comes to horror games, the game mechanic can come into conflict with the game narrative. Demons leaving glowing orbs in the world when they die is pretty easy to accept, but snakes dropping gold coins? Or hulking flesh monsters keeping valuable weapons schematics in their back pockets as they lumber around their derelict space craft? Sometimes it just doesn’t make any sense.

In Resident Evil 4, the store is an actual in-game guy. Though campy, I think that this implementation is the best; it makes narrative sense that different store owners, despite all looking like clones of each other, might have different stock. In Resident Evil 5, the store guy has been dispensed with and now you can only make purchases and level up before entering a level. For no particular reason (well, actually, to prevent the player from powering up too quickly), certain upgrades for weapons are not immediately available. As a in-game guy, this might make sense; the clerk can just be out of stock. As a sterile UI screen, it makes a lot less sense. Dead Space’s implementation also bothers me. If we’re to believe that Isaac is this awesome engineer, shouldn’t he be able to like, I don’t know, hack the store software and get the items he needs rather than having to loot the corpses of fallen scissor hand monsters? Maybe that was too Bioshock.

Another issue with this kind of upgrade system is that it can’t be relied upon for normal game play. The game designer must assume that the player will not upgrade his weapons, or that he will upgrade them in an inefficient way. The goal is to provide a workaround for difficulty cliffs, not a new minmax problem. Games like Fatal Frame 2, the upgrade system was intended to reward players who are good at difficult “zero shots,” but the end boss was balanced such that players who didn’t upgrade their camera in the right way could get to the end of the game with a bunch of useless skills. To fix that problem they had to move the last save point far away from the end boss and put a bunch of easy enemies in between the two so that players could get some extra level-up points after they had saved their game. I complained about this at the time–it was a hack necessitated by the way that their upgrade system works and by the design of the end boss, and it made the end of the game very frustrating.

But the worst offender has to be the Resident Evil 5 money system. Other than the upgrade gating, there’s no problem with the actual implementation: pick up funds by killing enemies or by finding them hidden around, and use those to buy weapons and upgrades. The problem is that, in the context of the game, this turns Chris and Sheva into grave robbers. Never mind the ever-present colonialism overtones that have sparked debate in the past (which I still maintain are unintentional–the game strives to avoid this linkage, but it often fails)–it doesn’t feel good to go into the ancient ruins of a lost civilization and steal golden statuettes in order to buy bigger guns. I’m not just trying to be politically correct here: for the protagonists, who are ostensibly working for an African aid organization, this sort of behavior is in direct opposition to their character. In fact, the narrative and the believability of the game’s world and story are hurt by this system.

So I’m beginning to think that the in-game store system isn’t a very good fit for horror games. It works well in games like Devil May Cry, where there’s not much need to get the player to suspend their disbelief and keep it there. But in horror games, working the store into the narrative in a way that makes sense seems pretty tough. I’ve yet to see it work smoothly; Resident Evil 4 is probably the best example, and even then the system adds to the game’s overall ridiculousness. Usually these games take place in extreme situations, so it’s reasonable to expect the characters to act in extreme ways. When they instead steal lost relics out of burial grounds or take a break from rescuing the president’s daughter to shoot a diamond out a rock, we are reminded that this is a game system and encouraged to think of it only as a collection and minmax challenge.

7 thoughts on “Horror vs the In-Game Store”