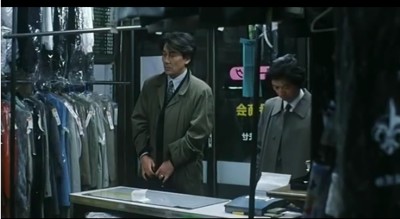 This unassuming scene is key to mapping the negative space in Kiyoshi Kurosawa’s Cure.

In the last post I wrote a little bit about the value of uncertainty in the mechanics of horror games. The idea is that the game may obfuscate certain game play systems (health, remaining ammunition, the location of enemies, etc) in order to keep the player off balance. A key trait of effective horror is the feeling that one has lost control; denying the player precise information lowers his own self-confidence. It’s a lot more uncomfortable to make a blind decision than an informed one, to chart a new route rather than follow a routine path. Many horror games take explicit steps to hobble the player’s ability to see the system behind the context of the game, to keep him in the dark about key information in order to prevent the mechanics from becoming comfortable.

Another interesting trait of horror games is that the exact same logic is often applied to the narrative. Horror game narratives are vine-like, twisting and turning in ways that you don’t expect. Suspense is the feeling of knowing that something is coming but not knowing what, or when, it will arrive; this is true whether the suspense is generated by a static-emitting radio radar, a long staircase that seems to go impossibly deep into the ground, or the suggestion that an ancient curse may still be in effect. If the player knows what’s going to happen ahead of time, the feeling of tension is lost; as with the mechanics obfuscation, it is necessary to hide details of the story from the player so that they are forced to operate with incomplete information. They are not in control.

There are many names for this approach, but my favorite is negative space. In this context, the term describes the bits of the story that are never explicitly communicated to the player. If we write a complete narrative down on index cards, with one event per card, and then pour the whole lot on the table, the cards that land face down are in the negative space. The reader can probably piece the story together from the cards that land face up, but he’ll have to use his imagination to fill in the blanks.

Akira Yamaoka described his approach to the narrative in Silent Hill as “creating space for the imagination.” He provides a pretty nice framework for thinking about negative space: he talks about the “stacking” of clues, fragments of (often conflicting) information that provide enough detail for the player to form a working theory about what is going on. The key to Yamaoka’s approach is that 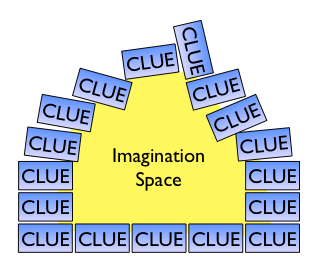 these clues are designed to mislead the player into thinking they understand the story so that a late scene can pull the rug out from under them when the “true horror” is revealed. Remember, the goal is to keep the player from becoming comfortable.

It’s important to underscore the connection Yamaoka makes between negative space and the player’s imagination. In fact, the purpose of the negative space, above and beyond keeping the player uncomfortable, is to provide an area for the mind to explore. Noel Carroll writes,

Nevertheless, a great deal of the sustaining interest in horror stories concerns the discover of the unknown. The majority of horror stories are, to a significant extent, representations of process of discovery, as well as often occasions for hypothesis formation on the part of the audience and, as such, these stories engage us in the drama of proof.

We’ve all seen predictable horror films, and they are always terrible; even an artistically elegant film cannot sustain our interest if the arc of the plot is obvious from the onset. We enjoy horror in no small part because it allows us to explore that which we do not know–to try to map the negative space.

It’s also interesting to note that the mere suggestion of the existence of negative space can increase the effectiveness of a narrative. I’m a big fan of Haruki Murakami’s novels because they are always about that which is unsaid; The Wind-up Bird Chronicle, one of my all-time favorite books, has enough negative space to house the Titanic. Another Murakami work, South of the Border, West of the Sun, is a good example of negative space as a passing suggestion of something far below the surface of the narrative. In it a man is suddenly reunited with a childhood friend, and he begins to fall for her. But the years intervening their childhood friendship and adult romance are a mystery, and her behavior is sometimes unexplainable. The book can be read as a simple drama about a man having a midlife crisis, but in typical Murakami fashion the ending reveals a small detail that throws all of the preceding events into question: the protagonist realizes that he cannot actually prove that his mysterious lover exists. The key to this revelation is so minor that you might gloss right over it, but for an astute reader it is the equivalent of Yamaoka’s “true horror”: the author has just thrown us into the deep end in the final pages by suggesting, only suggesting, that things are not as they appear.

written before about how culture shock can be a major horror affordance. The idea is that when we consume horror media that comes from another culture, we are thrown off balance because we cannot read the tropes and cliches. The work may not actually be complicated, but it’s almost certainly based on themes and patterns that are culturally specific. Another way to say that is that a foreign culture is often a large negative space upon which the work rests. When we look into the pool it appears to be very deep indeed. This might be why so many terrible foreign movies found resonance in the West in the early 2000s. After The Ring (a very nice film) opened the floodgates, all manner of cheap copycats and C-grade films from Japan, Korea, and China were suddenly snapped up by publishing companies, subtitled, and released to an unsuspecting public. Since the mere suggestion of negative space is enough to deepen the impact of a horror work, even the crappy movies seemed like a breath of fresh air because they were implicitly tied to foreign norms. People ate up films that would otherwise be regarded as absolute schlock because they were actually exploring an imagination space built out of unfamiliar cultural cues rather than one constructed by an agile narrative.

Negative space serves two major functions in horror narratives: it deepens our interest by forcing us to think about what is going on, and it keeps us unbalanced (and therefore, not in control) by reinforcing the idea that we are operating with incomplete knowledge. I’m a pretty hardcore Siren fan, and after 100%-ing that game I have a pretty good idea of what happens and why, but there are still a lot of questions that I don’t have answers to. Though most of the questions are eventually resolved, Catherine is keeps you guessing for most of the game. Hell Night doles its plot out in reliable chunks, but late in the game it does something that forces you to reevaluate all of your assumptions. And of course, Silent Hill 2, the king of negative space in games, remains one of the most highly respected narratives in game history. It’s no accident that these games are highly regarded; the existence of negative space is a boilerplate requirement for horror narratives.

5 thoughts on “The Value of Uncertainty Part 2: Negative Space”