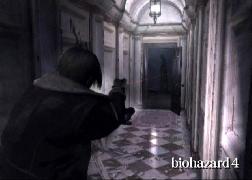 This picture is not out of date, I swear.

If you run a site about video games, or read message boards about video games, or even give Wikipedia articles on video games a passing glance, you are sure to find people arguing about asinine details of unimportant topics. I’m sure this is true for all kinds of subjects, especially those that have to do with popular culture, but since most of my internet surfing time is devoted to video game related sites, I’ve noticed it most dramatically in relation to video games. This site is no exception, of course, and today I am going to present an argument for an asinine detail of an unimportant topic that I’ve seen come up a few times: whether Resident Evil 4 should be considered a horror game or not.

There are a few arguments in particular on this topic that I want to address, and I’ve enumerated them below. My real message here is that classification of media is an inexact science, and therefore it is pointless to argue the particulars of any particular classification. That’s a little academic and esoteric-sounding, though, so I’m going to use RE4 as a way to ground that assertion.

Point 1: Resident Evil 4 is an action game, which means it can’t possibly be horror..

This is a very narrow-minded viewpoint that I’ve come across several times. The idea, I guess, is that horror games, particularly survival horror games, are required to scare the player by de-emphasizing combat or making it arduous. Previous Resident Evil games have rationed ammo and health, the Silent Hill series prefers bludgeons to guns, and games like Siren make combat extremely difficult on purpose. As I’ve written about in the past, many horror games seek to make the protagonist more vulnerable by weakening them in combat in order to increase tension.

The problem with the idea that action and horror are incompatible is that to believe it you must assume that there is only one right way to make a scary video game. Consider horror film: we have no problem lumping Child’s Play, Jacob’s Ladder, and Werner Herzog’s Nosferatu into the same “horror” category even though all three of those films are very different. I think the key requirement for a horror game is that it must attempt to be scary any way it can; whether that is achieved by making the player vulnerable or rationing save items or using excessive darkness is just a detail.

I also think that Resident Evil 4 is very clearly designed to scare the player. The key difference between it and previous Resident Evil games is that the protagonist is much more deft at combat and ammo rationing has been removed from the equation. But think about how the Los Ganados swarm Leon from every side; consider the unkillable Chainsaw Man; recall the tension that is induced by those goddamn Regenerators; remember how the first encounter with a Verdugo made you dread the second. These are all classic Resident Evil-isms: they are the developers using over-the-top monsters to put the otherwise tough-looking protagonist in a weak position to induce fear. Making Ashley’s life the player’s responsibility has a similar effect, as does the extremely personal camera perspective. The fact that Leon cannot move and shoot at the same time should be a clear indication that the developers didn’t want to make him so competent that he is never in danger. Compare their approach to the one used in Gears of War, which takes many of its stylistic cues from Resident Evil 4 but fails to induce tension in the same way.

I am constantly astounded by this perspective. Perhaps it’s my experience as a games developer that makes me feel this way, but Point 2 is so wrong in 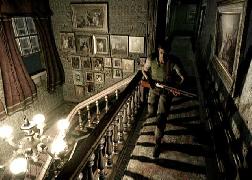 Holding up to run towards the camera can’t be done in a lot of games.

so many ways. It’s true that the earlier Resident Evil games were known for their difficult control scheme, but the idea that such a scheme was intentionally used in order to make the player feel even more vulnerable is nonsense.

Here is why the original Resident Evil control scheme was made the way it was. When it came out, the Dual Shock controller with its analog sticks had yet to be released; the controller that came with the PS1 only had a simple D-Pad. Most 3rd-person 3D games then (and now) employed a camera that followed behind the player, rotating with the player’s movement; when the player pressed “up” on the D-Pad, that translated into “forward” in the world, where forward is whichever direction the camera is facing. Resident Evil, on the other hand, used fixed cameras, cameras that never rotated or moved from their position. This style of camera was a requirement, as Resident Evil used pre-rendered backgrounds (the fixed perspective also helped Resident Evil be so scary). The problem with that approach is that the definition of “forward” changes with every camera cut, and the player has no idea when that is going to happen. If you are holding up to run forward down a hall and then suddenly the camera cuts to an angle perpendicular to the previous view, your character would rotate 90 degrees and run straight into the wall. To compensate for this, the developers at Capcom made the control scheme local to the player rather than related to the camera. Thus “up” on the D-Pad moves the player in the direction that their character is facing. This way the player can run forward across any number of camera cuts without worrying about their character accidentally changing direction.

The problem with a character-centric control scheme is that it makes no sense to people at first. The camera-centric scheme that most other games employ makes a lot of sense, and so to play Resident Evil people needed to train themselves to be able to drive their character around like a tank. A few years later Parasite Eve would mostly solve this problem by allowing the player’s movement direction to persist across camera cuts; this approach was eventually polished and made standard by Devil May Cry. But in 1996 when Resident Evil shipped, the only reference for this type of game was Alone in the Dark, which used the same sort of control scheme to solve the same problem.

Resident Evil’s awkward controls were designed out of necessity, not because they served another purpose. If the developers had really wanted to make the control scheme difficult, they wouldn’t have included the auto-aim functionality when shooting. More recent Resident Evil games (such as the GameCube remake) have featured other, better control schemes (Type C is awesome) without damaging the horror elements of the game at all.

Point 3: Resident Evil 4 isn’t horror because it is missing < insert favorite feature from previous games in the series >.

A surprisingly large number of people can’t get past the fact that the game says Resident Evil on the box and yet the content is so different from previous games. I don’t really know what to say to these people; just like everything else, video games change and evolve. You don’t have to like the new format, but I think that you are fooling yourself if you believe it to be intrinsically inferior to the previous format. It’s a different design with different goals, but it reuses characters and themes from the rest of the series. That’s not complicated, right?

And there you have it. As promised, this was a lengthy rant on an asinine detail of an extremely unimportant topic. I feel like I’ve done my part to contribute to the internet, and no longer have to worry about getting into some flame war on a forum in order to fill my asinine topic debate quota for this month.