In the May 2004 issue of Game Developer magazine, Richard Rouse III comments that his goal when designing The Suffering was to produce an “action horror” title, rather than a “survival horror” title (Rouse’s article is available online at Gamasutra, registration required). To Rouse, the difference between the two types of game design boils down to the use of fixed cameras, the focus on collecting objects (like keys), the control scheme, and the frailty of the protagonist. In The Suffering, Rouse wanted to build a game that was closer to Half-Life than to Resident Evil, but his goal was also to balance heavy action with legitimate horror.

The characters in the Silent Hill and Fatal Frame series are intended to look vulnerable.

I found Rouse’s description of how his game differed from “survival horror” quite interesting, particularly his point about avoiding a frail protagonist. Looking back over the multitude of horror titles that have been released in the last ten years, it seems clear that two different schools of thought exist about how horror protagonists should be designed.

On one end of the spectrum we have the weak and frail-looking characters Rouse wanted to avoid. The Silent Hill series, for example, has consistently employed “average joe” characters as their protagonists, personalities who are not trained in combat and do not have nerves of steel. The Fatal Frame series uses a similar approach, casting a young college student as the lead.

On the other end of the spectrum we have games like Resident Evil, Extermination, The Thing, and Carrier. In these titles, the lead characters are highly trained mercenaries, super-soldiers with extensive combat experience.

This discrepancy in character design has significant influence over the rest of the game. As horror cinema and literature has taught us, it is important that the player feel that they are constantly in danger, and that the possibility of death looms around every corner. Using a frail-looking character thus enables designers to achieve scares with less effort, as we have little trouble believing that the ghosts in Fatal Frame would make short work of a college student like Miku.

Resident Evil characters, on the other hand, are designed to look tough.

The challenge facing designers who choose to use strong and combat-ready protagonists is thus to find a way to make their super-soldier characters seem vulnerable. In Resident Evil, this was accomplished by heavily rationing save games and ammunition; tension was created by making every shot count. In The Thing, the developers attempted to scare the player by allowing NPCs to display human vulnerabilities, such as irrational fear. By selecting a macho lead, the developers of these titles forced themselves to handicap the player in order to maintain the atmosphere of danger and fear.

Even if the character looks weak and vulnerable, several developers have taken explicit steps to further hamper their character’s fighting prowess. In Silent Hill, Harry is a lousy shot, and it takes him several seconds to aim. In Eternal Darkness, the protagonist’s fighting and magic abilities are offset by the insanity effects that plague the player throughout the game. The Clock Tower and Echo Night series take this idea one step further by simply preventing the main characters from attacking their enemies at all. The goal of these choices is to render the player more vulnerable and thus increase the amount of tension generated by the game.

But the influence a character design can have over a horror game is not limited to game mechanics. By selecting a macho super-soldier as the lead character, the game designer forces himself to invent situations where even this highly trained mercenary is defenseless. For example, Resident EviI’s giant snake monsters, colossal Tyrant enemies, and hoards of zombies are designed to make even the macho STARS mercenaries look overwhelmed. The same is true for the frequent underground laboratories, giant Victorian complexes, and corporate conspiracy themes that Resident Evil employs. These designs are a direct product of the robustness of the protagonists created for the title. In contrast, Silent Hill’s rather ordinary setting and less over-the-top enemies are a reflection of its “average joe” main character. 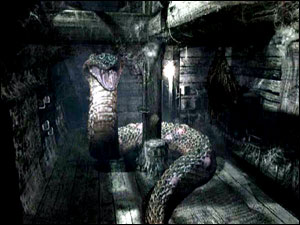 When the protagonists are powerful, the enemies must also be extra powerful.

The macho-ness of the character design is also reflected in the weapon design. While we have no problem accepting Resident Evil’s Chris when he wields a rocket launcher, the machine gun in Silent Hill 3 feels out of place in Heather’s hands; she seems much more comfortable with a simple lead pipe. The weapon in Fatal Frame is another good example: much of the horror of that game is derived from the idea that Miku has no defense against her ghostly assailants except an antique camera.


So how does The Suffering fit in to all of this? Since Torque is a macho lead character, Rouse and his team had their work cut out for them; we can see Torque’s bad-ass nature reflected in the horrific monster designs, but the protagonist is so powerful that we never really need to worry about his safety. Instead, the design focus in The Suffering is on the levels and the non-player characters. The levels themselves suggest that something much more dramatic than a single man’s peril is at work, which makes the player feel smaller and less significant in the grand scheme of things. If Torque doesn’t make it through this ordeal, nobody will really notice. Furthermore, everybody that Torque meets is weaker than he is, and if you chose the “good” route you feel compelled to protect them.

A good horror story character is a fictional someone who is every bit as alive and as much a unique individual as anyone we really know–really well–out here in RealityLand. He must be for readers to care about him. If readers don’t care, they will not give a rap about what the character does or what happens to him. You can make your readers like or dislike, love or hate a character, but you can never allow readers to feel only indifference toward him.[1] 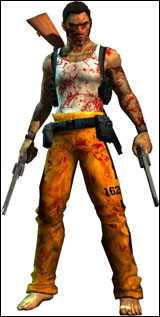 We’re not scared for Torque as much as we are for the other characters he meets.

Now, Torque doesn’t seem to live up to Castle’s requirements. He’s silent, sort of a stereotypical tough guy, and since he has little memory of his past we really don’t know all that much about him. There are plenty of questions about his character for the player to fill in, though. First of all, the game suggests that Torque may or may not be a psychotic killer, but as you play it becomes clear that regardless of his guilt in the murder of his family, Torque has some serious mental issues. Secondly, Torque is introduced to a roster of characters that have already been killed by the evil permeating Carnate Island, and this undead chorus is probably the most horrific aspect of the entire game. The game suggests that if Torque is not careful, he too may end up like his ghostly commentators, which appears to be a frightening way to spend eternity.
Finally, the enemies in The Suffering are also pretty brutal killing machines, and they often come in groups. The game constantly shows you these monsters overpowering regular humans, which serves both to heighten the danger to Torque and also to increase the degree of his bad-ass-ness.

But the key to understanding how The Suffering works is the non-player characters. In his article, Castle advises the aspiring horror author to “write what you know” in order to create the most believable, individual, and most importantly credible characters. The Suffering succeeds in this endeavor despite employing a silent tough guy as its protagonist because Rouse does an excellent job of developing the NPCs that Torque meets. Since we have direct control over Torque’s actions and choices, the game spends its time creating back story for the other inmates, the ghastly chorus that haunts the prison on Carnate Island, the guards, and people that never appear in the game (such as Consuela, the wife of a guard who maintains a journal about the island).

The monologues of these characters make them creditable, give them individuality and personality, and most importantly make them real. When we meet the guard Ernesto toward the end of the game, we already know something about him. When he says that he needs to get back to town to see his wife, we already know who he’s talking about because we’ve been reading Consuela’s journal the whole game. Torque is constantly asked to decide to kill or help the characters he meets, and the believability of each non-player character makes those choices real. As Castle would put it, we care about the other characters in the game, and thus the decisions we make for Torque are meaningful.

Horror is scary because we identify with characters who are in dangerous situations. We feel scared for them, whether they are within our direct control or not. Shallow and generic characters produce games that are not frightening, because we just don’t care about them. Almost every aspect of horror game design is related to the design of the game’s protagonist, and the best games in this genre are those that reflect the main character in level, enemy, and weapon design. Next time you play a game that you find really scary, ask yourself: are you scared by the Thing Under The Stairs, or are you really scared by what the implications of that Thing mean to the protagonist?

12 thoughts on “Designing Characters to be Scared For”