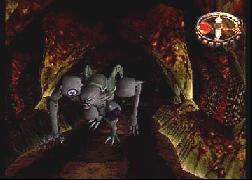 Having a baby has really changed my gaming habits, but this week I managed to finish two different games. The first is Hellnight, a phenomenal (and pretty obscure) PS1 horror game. I’ve posted a review, but the short version is that Hellnight absolutely rocks, it’s pretty damn scary, and it succeeds despite PS1 graphics and an extremely simple game interface. This is a game that anybody who thinks next gen is required to make new experiences should play.

The second game isn’t a horror game, but since I’ve discussed Suda51’s games before, I thought I’d give a little shout out to No More Heros. Grasshopper’s latest is as self-referential and post modern as it is hilarious and fun. With constant references to video games as a medium, No More Heros is a game clearly made by gamers for gamers. At the same time it experiments with “breaking the fourth wall” all the time; the characters are often speaking to you the player rather than to other characters in the game world. Other than the Metal Gear Solid series, this is pretty much unprecedented in medium, and I really enjoyed it. Oh, and the combat system is pretty hot too.

20 thoughts on “That Which Rocks My Socks”