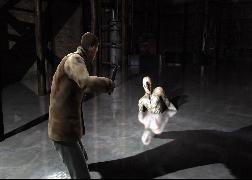 A return to survival horror’s roots?

Leigh Alexander has an excellent article on the way survival horror games have changed up on Kotaku this morning. If you’ve never read Alexander’s stuff before, she’s one of the few game journalists that really gets genres like survival horror (I’ve linked to her writing before). Her latest article, Does Survival Horror Really Still Exist? is, as usual, in-depth, well written, and thought provoking. In it, Alexander considers the way that lousy combat, a hallmark of traditional survival horror games, has evolved into something very different in recent games like Resident Evil 4.

The article describes how the era of Japanese-influenced games, which prioritized psychological fear and slower paced game play, has given way to an era in which Western action-oriented game mechanics are popular. This is certainly a hot topic in the survival horror community.

Alexander ends the article on a promising note–apparently after playing through Silent Hill 5 she feels that it is a return to form. It’s not often that the mainstream gaming press is able to capture this genre as a whole and discuss it intelligently, and so when a gem like this comes along I feel almost obligated to direct you towards it. She was also nice enough to link to me.