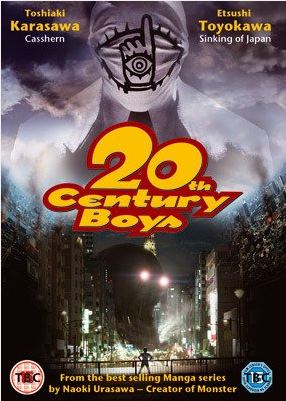 This is a bit off-topic for this blog, but I wanted to make comment about the film adaptation of 20th Century Boys (２０世紀少年) a pretty killer manga by Naoki Urasawa. The manga is about Kenji, a regular joe convenience store owner who realizes that a story he wrote as a child about the destruction of Tokyo is being used as basis for an insane terrorist plot. The manga is very long and quite complicated; it jumps back and forth between present-day Japan, Japan in the near future, and Japan in the early 1960s. There are a great many characters and the connections between them are hard to keep track of. But the whole thing is fascinating, both because it’s a high tension drama about a single man’s attempt to stop a madman that everybody else seems to love, and because it shows how the central characters age and change over time. It is not, I would think, an easy work to convert into a film.

However, having watched the first film a few weeks ago (which covers about the first 1/2 of the story; the second film is in theaters here now), I am greatly impressed by the extreme care with which the story has been adapted. There are a few minor changes, and more than a few unnecessary scenes have been trimmed, but fundamentally the (quite long) film hits every single major plot point from the first half of the manga series perfectly. The characters are all there, and the actors and actresses portraying them have been so perfectly selected that most characters are immediately recognizable. This is, hands down, the most faithful adaptation of any comic, video game, or book to film that I have ever seen (the first couple of Spider-Man films were pretty faithful too, but they have nothing on 20th Century Boys). It’s as if the director sat down with the comic panels and used them directly as his story boards; with the exception of a number of omitted scenes, it’s pretty much all there.

The problem is, I get the feeling that the film will make absolutely no sense to viewers who are not already familiar with the manga. The transitions from scene to scene, from time slice to time slice, are too abrupt and arbitrary; in the original comic there were plenty of pages of exposition to ease the reader from one theme to the next, but the film has so many bases to cover in such a short amount of time that it is reduced to a collection of almost unconnected scenes (although each scene itself is quite good). Clearly the film suffers from its short time limit, even though it clocks in at two and a half hours. There’s just too much story to tell, and while a series of three films might have made more sense length-wise, the plot is very easy to divide in half and very hard to divide into thirds.

So I am left wondering if a work like this can be translated to film properly. Stephen King is famously hands-off when it comes to films based on his work because he believes film to be fundamentally different than writing, and he leaves it in the hands of his directors to render his works in screen format. But then again, almost all of the movies based on Kings works are terrible (though it’s worth mentioning that the non-terrible ones are absolute gems). In the case of 20th Century Boys, the director has been absolutely meticulous in the translation of the manga to film, and yet the result feels disjointed and off-pace. When I went to see the Silent Hill film, the friends I was with were evenly split about the first fifteen minutes: those who have played the games loved the well-executed film recreation, and those who had not played the games found the intro long and boring. I’ve yet to see the Siren film that came out here in Japan, but I suspect that it will be pretty bad if it just tries to recreate the plot of the game; there’s too many characters and too much cyclical interaction for the story to play out well linearly. Maybe the approach of the first Resident Evil film, which used the main characteristics of the series as its thematic basis but then presented an original story, is the better way to go (that film is unfortunately also pretty bad).