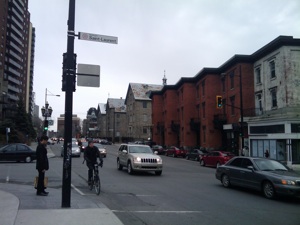 Montreal is a beautiful city.

I have logged a lot of time in the air this month. I flew from Japan to the Bay Area in early April, then flew up to Oregon to see my family, and now I am sitting in a hotel room in Montreal. On Sunday I return to the Bay Area and on Tuesday I will get back in the plane and fly back to Japan. Hello frequent flyer miles!

I am in Montreal, which is a fantastic (but very cold) city, for the first time in about eight years, to attend the Thinking After Dark conference, which is all about horror video games. Today was the first day of the conference, which runs for three days. On Saturday I am giving a (very short) talk about using horror games to study Japanese culture, a topic that I think is a pretty predictable selection for me. The conference is located in a neat old building that was selected because “it looks like something out of Resident Evil.” I can tell that I am in the company of friends, though I have to admit that some of the lingo is so academic that I have trouble understanding it.

Today’s talks were all interesting, and I took a ton of notes. In fact, I have so many notes that rather than trying to describe each individual talk, I am going to just record some of the key interesting points that I heard today. I’m going to break the notes up into separate posts because there’s just too much information. Also, even though there’s a lot of content here you should understand that I am applying a pretty strict filter; these talks have way more info in them than I can possible transcribe here.

The first keynote, by Barry K. Grant of Brock University, was about horror cinema. Grant is the author of numerous books on cinema and had a whole lot to say about horror films. Some points:

Second was a talk by Tanya Krzywinska of Brunel University. She has also written extensively about games and film. Her talk covered tons of bases and is difficult to summarize, so I’ll just list a few interesting points:

I’ll save the rest of today’s talks for a future post. In fact, at this rate I might just have to move everything to an article or present a less informative but more concise summary of the day’s events. Which would you prefer?

9 thoughts on “Thinking After Dark: Day 1”