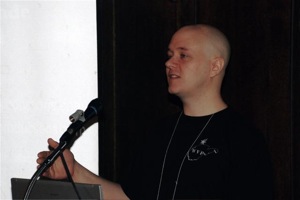 Note: I wrote this blog post over two months ago, but it sat lost in some dark corner of my hard drive until today. I think that this is probably one of the most interesting topics to come out of the Thinking After Dark conference for folks here on this site, so I wanted to make sure I got the content right. Apologies for the delay.

Slowly, slowly, I am running my notes through a hand-crank machine that spits out blog posts (and hopefully corrects my grammar and spelling in the process–looking back, these notes are all over the place).

One of my favorite talks at the Thinking After Dark conference back in April was Richard Rouse III’s discussion and semi-post mortem of The Suffering, which he designed. Though the pure academic talks were pretty thought-provoking, the game developer inside me was very happy to hear about the actual process of making a (pretty damn good) horror game.

Rouse described The Suffering as a clear-cut case of “action-horror.” He had an interesting formula for thinking about the elements of different games can be added or removed to change the experience. Devil May Cry, he says, is Resident Evil without the horror. If we added Quake and Resident Evil together we get something like Half-Life. So what would we get if we added more horror to Half-Life, or added the horror back into Devil May Cry? What about Max Payne + horror? This was the thought process that led to the initial pitch of The Suffering to its publisher as Devil May Cry frenetic game play combined with the horror of Resident Evil combined with the competent story of Half-Life.

Another way to think about this, according to Rouse, is to consider which elements the game team will begin with: game play, story, or tech? Half-Life is based around game play first, while Resident Evil is more story focused. For The Suffering, the goal was to be a horror-version of Half-Life + Max Payne, which means a focus on the game play first. Possible areas of focus for the development team are player controls, horror, the player character, interesting creature designs, realistic settings, or touching on serious subjects. For The Suffering, controls were #1, character #2, realism #3, creature design #4, and horror came in #5.

So given that breakdown, Rouse described how he and his team needed to determine if they were making, as Rouse put it, “Alien or Aliens.” In Alien, you have a sort of one-on-one duel, with a group of astronauts who have no combat training taking on a single alien, with a focus on tension and suspense. Aliens, by contrast, is a fast-paced, action oriented film about a highly trained military combat unit combatting a large collection of aliens. Though Rouse’s original intention was to create something closer to Alien, the focus on game play really made Aliens a better fit. Thus, the game was conceived as “action-horror.” As an aside, Rouse also noted that more recent Resident Evil games, starting with Resident Evil 4, have moved closer to the action side of things in order to expand its audience. Rouse believes that RE4 was so successful because it resolved the series’ famously difficult control scheme, which was a limiting factor.

So, in response to Midway’s request for a Devil May Cry-like horror game, Rouse pitched The Suffering and then got to work. However, at first he and his team produced a game that was clearly action but contained very little horror. When his publisher asked that he increase the focus on horror, he went back to horror films to figure out how. Rouse names The Shining, The Birds, and The Twilight Zone as major influences. The Shining was his source of inspiration for The Suffering’s flashback sequences; he had generated a huge amount of backstory concerning the island but didn’t have a good way to communicate it to the player. Very late in development the team shifted focus and added in the numerous flashback and storytelling sequences, as well as cut scenes about Torque’s family (according to Rouse, the family was absent from the entire game until about three months before ship; the final product is completely cohesive, so I never would have guessed).

Rouse used The Birds to illustrate how horror films can offer multiple, conflicting theories as to why the bad stuff is happening without ever really answering any questions. There’s always the question of how much of the real story to reveal to the player and how much to leave to the imagination. In The Birds, the characters debate the merits of various theories as to why the birds have all gone crazy, which keeps the audience from feeling frustrated that there is no obvious explanation. But The Birds never shows its hand; the theories proposed in the film are never validated or concretely discredited, and the audience is left with more questions than answers. Rouse decided to go a similar route with The Suffering by making each of the buddy characters that Torque meets have his own pet theory for why the island has erupted. And while Rouse admitted to having his own theory about what is going on, he refused to share it with the group and noted that he also never shared it with his development team: the point was not to have a single “correct” explanation.

Rouse concluded his talk with a very clear and concise analysis of why horror, including horror games, matter: they can be used to address topics that are otherwise socially untouchable. He used two quotes to illustrate his point:

The Twilight Zone doesn’t use scripts as vehicles of social criticism. These are strictly for entertainment.

This is a quote by Rod Serling, the producer behind The Twilight Zone, and Rouse was quick to point out that it’s a flat-out lie. The Twilight Zone was quite often used for social commentary, some of it particularly biting at the time that it was aired. They got away with it because the theme was science fiction, so pundits wrote it off while the actual viewing audience simultaneously grew.

In a horror film, you can address [slavery]. Which if you addressed it in a straight drama, all the corporate nay-sayers would say ‘ oh we don’t want to say that’ in a horror film, they say ‘it’s just garbage, some bloody nonsense for the kids.

This one is from Bernard Rose, director of Candyman. Rouse suggested that Candyman deals more directly with the topic of slavery than many other mass-market films, and is able to do so because it is also horror. In The Suffering, Rouse’s story, particularly the enemies, was

designed to make people think. He touches on all sorts of horrific events that have taken place in US history: the slave trade, which trials, ethnic cleansing, and most importantly for Rouse, capital punishment. Rouse made it clear that he wanted to make a game that caused people to think about capital punishment, but he could never have done it with a genre other than horror. The horror genre, Rouse says, gets a pass because people write it off, and that gives the genre real power.

I got a bit of time to talk to Rouse after his presentation and found that he’s a pretty cool, laid back guy. He was sort of the odd man out at the conference in many ways; not only was he the only speaker who had ever actually made a horror game, he was also probably the person who was least interested in horror as a genre. I’m glad to have met him and I throughly enjoyed his talk.