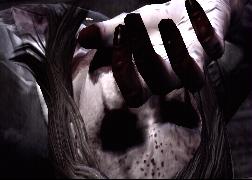 This is the fourth (and final) post in a series of posts about Deadly Premonition. You should read the first, second, and third entries first.

I really like how Deadly Premonition deals with the Otherworld, a label I am borrowing from the Silent Hill series to describe an alternate reality, infested with zombies and other malicious creatures, that mimics the look and layout of the real world but seems decrepit and decayed. In Silent Hill, the Otherworld is often a form of narrative beat, a way for the characters to pass into a yet-scarier version of the game, a way for the designers to ratchet the tension up another notch (or, in some cases, two or three notches, all at once). Deadly Premonition uses the same sort of game mode a different way: to separate straightforward reality from the world of hidden connections and meaning. Agent York’s descent into each Otherworld is more like a descent into the unconscious mind, where he’s able to find links between things that are not obvious in the real world. This is how York performs his investigation, by finding bits and pieces of seemingly unrelated clues and then linking them together in a way that makes the picture clear. He does this in his dreams, and sometimes the middle of a normal day. But in the Otherworld, York has the ability to physically explore this space. He calls the method “profiling.”

The Otherworld is not a safe place, however. Though York is able to use this nether region to draw conclusions from uncommon sources, he also makes himself vulnerable to the malicious entities that reside in that space. Perhaps, if we see the Otherworld strictly as York’s unconscious mind, we might conclude that these entities are of his own creation, based on what he knows about the case. I think it’s more likely that York is visiting a physical space, a sort of distorted mirror of the real world, where evil takes a different, more substantial 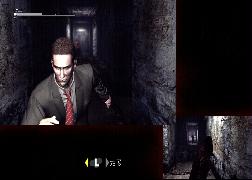 form. This interpretation is reinforced late in the game, when other characters enter the Otherworld as well.

In terms of pure game mechanics, the Otherworld gives the designers a way to cleanly break between the open world and a more traditional indoor level design. This is a great place for zombies, gun combat, and exploration, which are all hard to do in an open world setting. The decision to switch not only game modes but also thematic modes when entering the Otherworld is, I think, pretty smart.

Deadly Premonition also uses the Otherworld to do something that is rare in video games: subtle foreshadowing. The game is the best example of foreshadowing that I’ve seen in quite a long time. One of the genius parts of Deadly Premonition is its use of color; the palette of the game slowly changes as Agent York gets deeper and deeper into the Otherworld, until finally the game simply smears a bright red haze over the entire frame. Silent Hill 2 used color to foreshadow, as did Condemned. But there are very, very few games that can make such a claim, and Deadly Premonition does it very well. Foreshadowing extends to level geometry as well; there’s a particular section near the end of the game in which the player must climb an incredibly long staircase (sort of the reverse of Silent Hill 2 and 4’s impossibly long staircases), all while very specific, crazy music plays in the background. The effect is pretty dramatic; the level of tension as the player reaches the door at the top of the stairs is very high.

FINISH IT UP, ZACH

This has been a long, unorganized stream of consciousness about a weird, delightful, scary game. If you couldn’t tell, there’s a lot of food for thought in Deadly Premonition, which I think is a mark of high quality. Though many reviewers may have been turned off by a lack of superficial polish, I think that Deadly Premonition is one of the best games I’ve played in a long time. It’s absolutely worth playing, thinking about, investigating, and examining. It is a rare gem.