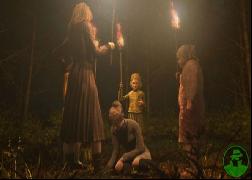 I’m writing this post from a hotel room in central London. I’m visiting the UK in order to attend the Develop Conference, a Europe-centric conference for game developers. Yesterday I took the train south to Brighton for the first day of the conference, a special day focused on mobile developers, and gave a talk to a sparse audience about my Android game, Replica Island. This is the third big conference I’ve spoken at this year; last year I did about twelve different events, which, thinking back on it now is fairly crazy.

My talk yesterday differed a bit from my normal pitch. I usually spend a lot of time telling game developers how to get the most out of Android phones. While there was a little bit of that in this talk, I decided to spend most of my time talking about my particular game development experience. What went right, what went wrong, what I intended to do and what I learned in the process, that kind of thing.

Something weird happened while I was designing the slides for this talk: though my intention to was speak about how side-scrollers might be successful on a phone, I kept coming back to design ideas that originally clawed their way into my consciousness via horror games. I often reference Jonathan Blow’s point about ‘interestingness’ in my talks; this is the idea that a good game design is one that keeps the player interested any way that it can, be that via interesting game mechanics or art style or narrative or music or whatever. Blow warns that pursuing innovation for the sake of innovation is “misguided” because innovation isn’t always interesting. That idea was certainly instructive in my design of Replica Island: I explicitly chose to base my design on tried-and-true mechanics and then increase the “interestingness” of the game through other means. But it occurred to me while preparing for this talk that the real proof of Blow’s point can be readily found in horror games, and that my approach to making my cute retro side scroller more fun was clearly influenced by common horror game patterns.

For example, take a game like Rule of Rose. I feel pretty much the same way about Rule of Rose now as I did back in 2007: it’s terrible. It’s got fantastic art and an interesting story line, and I dug the music at first, but the game itself is basically unplayable: the collision detection doesn’t work, combat doesn’t work, the dog mechanic doesn’t work; I finally quit playing it because I got stuck in a section where I cannot progress and yet I cannot go back. The game is broken.

And yet, and yet, Rule of Rose has a pretty major following. It has its own high-quality fan site that, by the way, is still being updated here in 2010. Every time I post an angry rant about this game, a couple of hardcore fans come out of the woodwork to tell me to give it another chance (I expect the same result from this post, and it’s not even really about Rule of Rose). Clearly some people didn’t just complete this game, they really enjoyed it.

Rule of Rose is, I think, an excellent proof of Blow’s interestingness idea: though I didn’t get hooked myself, a lot of folks were so in love with the art, the style, the

characters, and especially the narrative that they were willing to forgive and ignore absolutely egregious design and implementation failures. There are lots of other mediocre games that have better mechanics but duller story lines (like, say, Cold Fear or Carrier, just to name two), but nobody makes fan sites for those games. It’s not just that those titles are mediocre, it’s that they simply aren’t interesting enough.

When I went about designing Replica Island, I did it the way I expect horror games do it: narrative first. I wrote an outline to the story, decided it wasn’t interesting enough, and then reassembled it as an out-of-order mixture of past events (“memories” in the game) and present day. This narrative structure ended up defining the level progression and pacing for the game. I added a lot of dialog, and I tried to make my characters have a little more depth than the average side-scroller. Taking a page out of the book of traditional horror design, I added snippets of an old diary to each level, each revealing slightly more about the author than the last. I tried to make the narrative interesting first and foremost, though at the same time I worked to ensure that the narrative could be entirely skipped by players who just want to crush enemies. Once that foundation was in place, I spent the rest of my time actually making the game–getting the mechanics right and tuning the levels and doing all the super-important mechanical stuff that makes up most of the moment-to-moment gameplay experience. Ideally, my game should be rock solid without any narrative; just in case it isn’t, or to keep players who aren’t really partial to side-scrollers playing, I tried to use narrative as a way to increase the interestingness of my game. This is, thinking about it now, a throughly Survival Horror approach to game design.

It’s hard to tell how effective I was at actually making a fun game, or if the focus on narrative helped. The user reviews have been pretty good, but there’s no obvious preference exhibited by commenters on Android Market (comments about the narrative seem to fall into “great story” and “tl;dr” categories with equal frequency). I’m certain that the art quality and style (courtesy of my good friend Genki) had at least as much to do with positive reviews as the narrative. And though I messed up the mechanics in a couple of places, the game seems to be generally fun for people to play. I’m quite proud that it’s one of the most-played games I’ve ever worked on.

Standing up on the stage in Brighton yesterday, I struggled a bit to convey this line of thinking to the audience. I mentioned the focus on narrative being a side-effect of my horror research, but I don’t think this was a particularly salient part of the lecture (though I did notice a few raised eyebrows). But thinking about it later, it occurred to me that I probably couldn’t have made a cute retro side scroller for a mobile phone if I hadn’t had horror games in my back pocket as a reference. That’s evidence that the thesis of this site–that the traits of horror games might be applicable to other genres–might be true. That’s pretty cool.