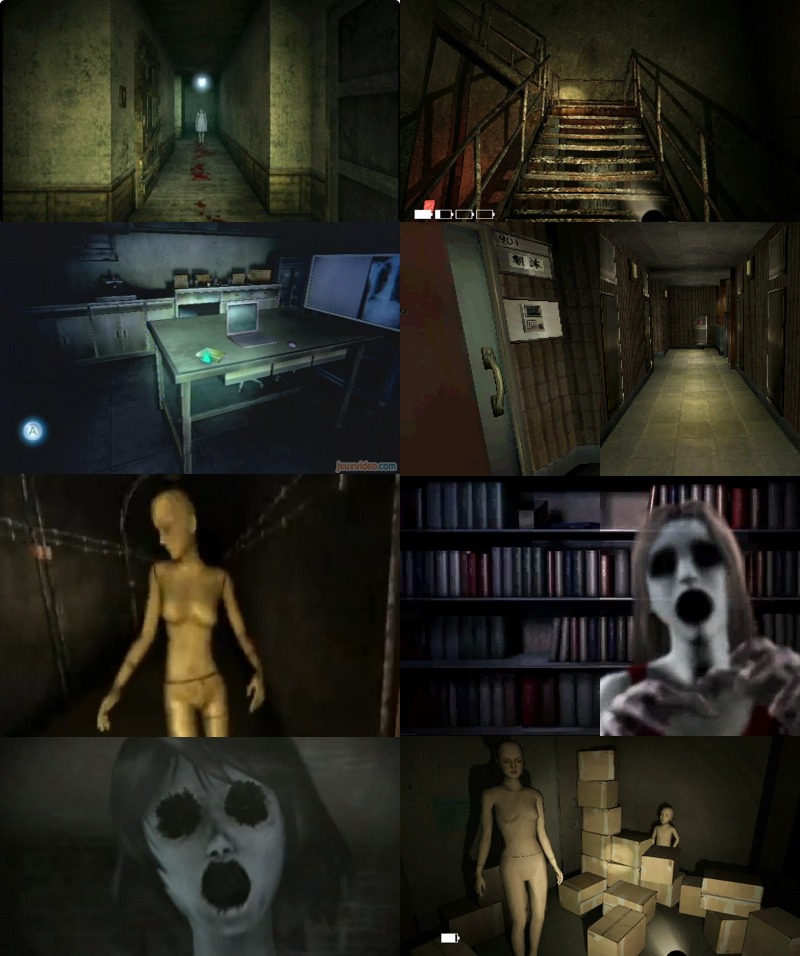 Scenes from Juon, Night of Sacrifice, Nanashi No Geemu, and Calling. Can you tell which is which? Click for bigger version.

A while back I wrote about a Wii horror game called Juon: The Grudge, based on the film of the same name. In that article I focused on how Juon seems to be a great translation of a teen horror flick to game form, and that it is interesting because it appears to be targeted at women and played with friends. One of the other aspects that I glossed over was the fact that Juon is incredibly easy to play: it’s designed so that people who have no game skills whatsoever can still appreciate it.

Last week I finished イケニエノヨル (Ikenie No Yoru, “Night of Sacrifice”), a horror game notable for its use of the Wii Balance Board. I wrote a review, which you should check out, because I actually enjoyed the game quite a bit. It wasn’t until I finished that game that it hit me: Night of Sacrifice and Juon are part of a larger movement of casual horror games.

In fact, there are several other games that fit this description on the market already. And thinking about it, they are all very similar games. In addition to Juon and Night of Sacrifice, consider Calling and Nanashi No Geemu. All four of these games are first person exploratory horror games with no combat whatsoever. They feature only the most basic of puzzles, all shipped exclusively for Nintendo platforms, and all use a pointer and a single button to move and play (in Nanashi No Geemu’s case, the pointer is the DS stylus; all the others use the Wiimote). They are short, easy, and even feature similar-looking enemies. All four of these games shipped close enough to each other that they are probably not ripping each other off–it’s more likely that different developers are operating independently to target the same audience. Perhaps an art movement rather than a sub genre. These games are casual horror games: horror games intended to be enjoyed by people who don’t necessarily have a lot of gaming skills.

There have been other non-combat, first person explorer horror games before these, of course (think Echo Night: Beyond and Hell Night), but those games are not as simple or straightforward as the more recent games above. Silent Hill: Shattered Memories is an interesting edge case; like the games above, it has few mechanics and is mostly concerned with exploration. But it doesn’t feel like a casual game; it’s full of puzzles and mechanics that rely on a certain level of game experience on the part of the player. It’s a simple game to control, but it’s not a simple game.

Juon and the rest, however, are about as simple as can be. Yet, they can still be pretty scary; even with all of the complicated stuff removed, each of these games is able to put even a veteran player like myself under pressure. They must be absolutely terrifying for neophytes.

I think there is potential for this style of casual horror game to become a third “branch” of the horror tree, the other two being Adventure-style horror games and Action-style horror games (see the previous post, and probably the next one, for lots of discussion about that particular division). Casual horror games haven’t caught on yet, at least not outside of Japan, but I think they have huge potential. Horror is a mass market genre–it appeals to people of all sorts, which is why Hollywood insists on producing horror films ad nauseum. Horror games, too, have a wide, diverse audience. Anecdotal evidence suggests, for example, that the readership for this site is pretty evenly split between men in women; in fact, there may be more women reading this than men. Though horror games have wide appeal, thus far they’ve only been targeted at a small subset of the population: gamers. But the introduction of casual horror games suggests that the genre can be brought to a much wider audience.

The mass market isn’t going to play these things on Wii or DS, though. They are going to play them on their phone or tablet. iOS and Android are probably the grounds upon which the casual horror audience will be won. Consider Dark Meadow, an atmospheric RPG that, while not quite a horror game, certainly takes many cues from the genre. Or the Mystique series of first-person horror escape games. These games are scratching at the surface of horror on mobile devices, but they are all well received and, like Juon and the others on traditional consoles, might be the beginning of a real trend. 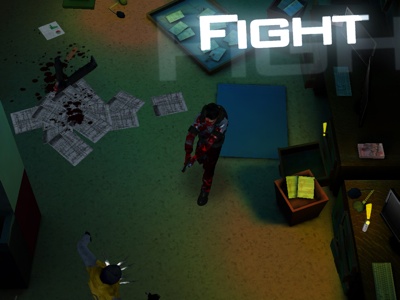 Last week I received a pre-release build of a game called End Night, which is scheduled to ship for iPad sometime in February. It’s an interesting mashup of traditional horror mechanics and tablet-centric pacing. The game is a single loop, played over and over, in which you try to guide your character from his safe house to more and more distant locations around town during a zombie invasion. Your mission is to collect samples from certain deceased persons and bring them back to your lab to produce a serum that just might cure the zombies. The moment-to-moment play is quite informed by traditional horror games: there are tons of stats to manage, health packs are few and far between, and ammunition is always scarce. Areas must be searched for items, wounds must be washed off to prevent infection, and car alarms may be sounded as a distraction. The game is also quite hard, and death sends you all the way back to the beginning. Mechanically, it’s very much a traditional horror game.

But End Night has been wrapped up in casual packaging. Each action in the game earns the player points, and points can be spent on upgrades after each death. So while you play the same (large) level over and over again, over time it gets easier as your character becomes more powerful. This short, engaging loop is what makes End Night throughly tablet-focused experience. The controls are pretty simple: just a virtual analog stick and a shoot button that auto-aims for you. The perspective is top down and the whole game is rendered in nice 3D. The game is complicated by tablet standards, but it’s dead simple compared to your average console horror game. It’s completely different from the Juon crowd, but its target audience is similar. I’ll write more about End Night when it comes out, but its existence alone is intriguing.

It is clear that many horror fans are less than thrilled by games like Resident Evil 5 because they miss the emphasis on narrative and slower pace employed by older games. These fans should be excited by games like Juon and End Night. They suggest that casual horror may become a bastion for “traditional” horror design, albeit structured in ways we might not normally associate with the genre. Tablets and phones may just be the market within which these games take hold.

20 thoughts on “The Rise of Casual Horror”