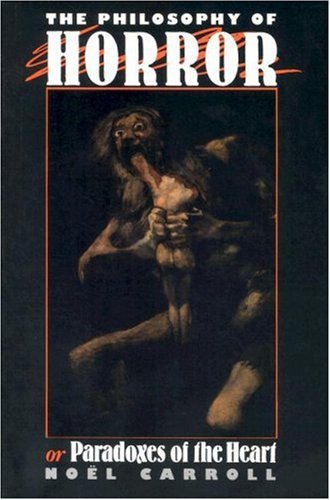 I’ve recently begun Noel Carroll‘s A Philosophy of Horror: Or, Paradoxes of the Heart, and though I’ve only just scratched the surface of the content I am already quite engrossed. Carroll’s intent is to take the horror genre, as defined by film and literature and other media, and put an academic lens to it; to cut the genre open and see how it works on the inside. Sounds familiar, right?

Carroll defines the emotion we get when we watch a scary film as “art-horror,” distinct from “horror” in that we know it to be fiction (watching Halloween doesn’t give you the same feeling as reading about Nazi concentration camps–that’s real horror). Art-horror is an emotion that rests on the line between fear and disgust. It is similar to suspense in that, when watching horror, the audience is intended to feel the same emotions as the protagonist. Carroll provides the following summary of his definition of art-horror:

I am occurrently art-horrified by some monster X, say Dracula, if and only if

The thing about the book is that, so far, it’s been incredibly validating. Carroll, writing in 1990, has arrived at many of the same conclusions that I have over the years. I saw applications of the Two-Factor Theory of Emotion to horror; Carroll provides a similar definition of emotion that requires both physical agitation and cognitive context. For years I had trouble defining horror from, say, mystery and suspense, and thus fell back on a requirement that games contain “supernatural elements,” much to the dismay of many Dino Crisis fans. On this subject, Carroll writes,

Moreover, in order to forestall charges of circularity, let me note that, for our purposes, “monster” refers to any being not believed to exist now according to contemporary science. Thus, dinosaurs and nonhuman visitors from another galaxy are monsters under this stipulation though the former once existed and the latter might exist. Whether they are monsters who are also horrifying in the context of a particular fiction depends upon whether they meet the conditions of the analysis above.

I’ve even used this site to discuss horror as a “thematic” genre, that is, one that is defined by its themes rather than its game play or narrative context. When the “supernatural elements” definition proved too thin, I fell back on defining games for this quest by the “intent to scare.” Carroll writes,

[I]t should not be assumed that all genres can be analyzed in the same way. Westerns, for example, are identified primarily by virtue of their setting. Novels, films, plays, paintings, and other works, that are grouped under the label “horror” are identified according to a different set of criteria. … The cross-art, cross-media genre of horror takes its title from the emotion it characteristically or rather ideally promotes; this emotion constitutes the identifying mark of horror.

Carroll also raises a number of points that I’ve never considered that seem quite relevant to the study of horror games. For example, he separates horror monsters from other stories in which monsters appear (e.g. fairy tales) by requiring that the monsters be unnatural to the characters. In horror, the “monster is an extraordinary character in our ordinary world, whereas in fairy tales and the like the monster is an ordinary character in an extraordinary world.” Carroll’s correlation between horror and monsters (he refers to scary works absent monsters, like Poe’s The Pit and the Pendulum, as promoting “terror” rather than “horror”) is also interesting, as is his requirement that the monsters of art-horror appear revolting and unclean. There are some areas in this definition that I wonder about (how do ghost stories fit these requirements?), but since I’ve only just begun the book I’ll wait for Carroll to complete his argument before commenting.

Carroll also presents a characteristic of art-horror that might be a way out of the inane debate about “survival horror” vs “action horror.” He notes that, in works of art-horror, the feelings of the principal characters are intended to mirror the feelings of the audience. “[H]orror appears to be one of those genres in which the emotive responses of the audience, ideally, run parallel to the emotions of the characters.” If that’s the case (and it seems reasonable enough), we can easily differentiate between, say, Siren, in which the characters cower in fear of the antagonists, and, for example, Resident Evil 5, in which the protagonists pop a cap in anything that moves. It also explains why that moment in Dead Space 2 when Isaac must return to the Ishimura and we can hear the fear in his voice is one of the most effective moments in that game.

Though A Philosophy of Horror is formal, it is not heavy-handed or overwritten the way that many academic texts are. I have only just begun to delve into the text, but I’m really enjoying it so far.

18 thoughts on “The Philosophy of Horror”