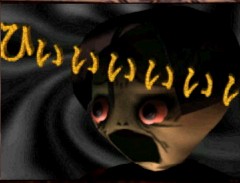 Last year I wrote about how I learn a lot from bad games. But what I didn’t say in that post was that I secretly love to play bad horror games, just as I secretly relish terrible horror movies. There’s a certain type of humor that is evoked by games and movies that are so terribly flawed that they become funny, and I find myself playing these games through just to see what the developers will screw up next. Fortunately for me, there are tons of awful games in the horror genre, and today I thought I’d talk about a few of them that you might not have heard of.

厄 〜友情談義〜 (Yaku ~Yujyou Dangi~; literal translation is something like, “Misfortune: Friendship Lecture”) is a visual novel by prolific Japanese developer IDEA FACTORY. Yaku appears to be their first game, and maybe that has something to do with why it’s so god-awful. Now, I’m not the kind of guy who really cares about graphics in games (though I am keen on good art styles), but the graphics in Yaku are some of the worst ever. The art style might have worked in 2D, but instead the designers at IDEA FACTORY, perhaps enamored with the art of Myst, decided to render everything in 3D cut scenes. The art and animation has all the earmarks of early attempts at 3D graphics: the camera moves very awkwardly, people don’t seem to be able to move and rotate simultaneously, and everything is so slow that it feels like the action is taking place underwater. The introductory movie looks like an Amiga ray tracing demo, with perfectly reflective spheres moving in slow motion. On top of this horrifically dated art is a standard visual novel: the player reads text and then makes a selection from a list of options. In Yaku most decisions are followed by a short (but not short enough!) movie displaying the 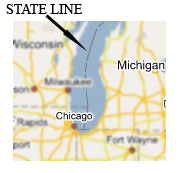 consequences of the player’s selection. The watch film in slow motion, read text, make selection, watch film cycle is so slow that the game is, for me anyway, neigh unplayable. In fact, I’ve only played the first few minutes of this game, as that is all I could stand. I’m pretty sure the text on the back of the box that says, “THIS GAME IS SCARY!!!” is false.

Michigan I gotta tell you, I dig games by Grasshopper’s Suda51. I liked Killer7 a lot, I enjoyed No More Heros, and I’m very interested in what his collaboration with Tecmo will produce for Fatal Frame 4. But even though the guy is awesome, and even though he made Michigan, Michigan is not awesome. In fact, it’s downright terrible. The premise is bad, the controls are bad, the level design is bad, the graphics are bad, the story is really bad and the game play is an atrocity. The idea is that you are a TV camera man thrust into the middle of some terrible monster attack in downtown Chicago (which, I might point out, isn’t even in Michigan). You, a female reporter, and a truly annoying sound guy must capture the events as they occur, and you are rewarded for filming “scoops.” A “scoop” is when you film something that is supposed to be interesting, sexy, or scary; you can get points for looking at things on the wall, or finding weird ghost things in the levels, or trying to film up the reporter’s dress. Occasionally the game will put you in a situation where the reporter is in danger, and you can choose to help her (at a cost of scoop points) or let her die for the camera. If any of this sounds interesting, your expectations are too high; nothing in the game is scary or erotic in any way, and while the idea that voyeurism might fit well in a horror game (as it did in Silent Hill 4) is interesting, the execution in Michigan is abysmal. To tell you the truth, the only way I got through this game is by kicking my teammates 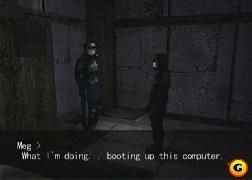 Clearly she’s booting up a computer. Can’t you tell?

down stairs, around corners, and into walls. The kick is a useless move, but it’s unintentionally hilarious when used on a reporter or the boom mic operator. Otherwise, everything about Michigan is really, really bad.

The Ring: Terror’s Realm I saved the best for last. The Ring is, hands down, probably the worst game that I’ve ever played, in any genre. Everything, everything about this game sucks. Technically it is related to the fantastic Japanese horror film of the same name, but there’s no way that you would know that just by playing the game. Rather than tracking down cursed video tapes made by disturbed psychic children, The Ring video game is about shooting ape monsters in some sort of awful Silent Hill-knockoff Otherworld. Even minor details are executed poorly; the texture map used for every door appears to be misaligned (the knob is close to the center), the rooms and characters were not modeled to the same scale, the pause menu takes close to 30 seconds to load, and the music is the most annoying four bars ever to infinitely repeat. There’s a boss that looks like a normal enemy but has a huge number of hit points, and a particular stairwell that causes the music to skip every time it is traversed, and the characters express themselves by repeating the three animations each of them has. Don’t even get me started on the story or dialog; at one point in the game, there is a lengthy conversation in which one character explains that she’s been “reincarnated as a child” over and over again, while the other character laments that she “doesn’t understand what you’re saying at all.” The Ring is truly the worst horror game ever, and possibly the worst game ever; it is an absolute failure in every respect. That said, if you can find it and you have a friend who enjoys this sort of thing, it’s good for a few laughs.

13 thoughts on “In Search of the Worst Horror Game Ever”