One of the things that running this site has taught me is that people absolutely love to argue about categorization, especially on the internet. So often the discussion centers around whether a particular game should be sorted into this bucket or that, and the definition of the buckets themselves is often the source of intense debate. What bugs me most about this entire topic is that while we’re so busy arguing about categorization, we rarely spend any time talking about the games themselves.

Which games do you like? Why do you like them? Have you really thought about what it is exactly that you enjoyed? It’s not always easy to identify the aspects of a game that really hook us; sometimes we don’t realize how much we enjoyed something until it turns up absent. Furthermore, personal preference is entirely that: inherently subjective and individual. It’s a lot easier to apply a label to a game, or an entire genre of games, and then just decide that everything under that banner is ok with you. And while that approach might help you make a purchasing decision, it doesn’t really tell us much about the games. It’s not a high resolution way to determine why some games work and some do not.

So here’s an experiment. I’m going to try to identify gross traits of a bunch of horror games absent any concept of “genre.” I don’t care if these games are “survival horror” or “action horror” or “psychological horror” or “curse horror” or “naked cartwheel horror,”–those are just labels. I’d rather understand how these games work, or how the game industry that produces them works. I’ve argued on this site that difficulty is one of the core traits of many successful horror games. I’ve also argued that games can generally be described as “mechanical” or “cognitive”: most of the challenge is either in doing things, or thinking about what to do next. I’m going to use these two ideas to try to find relationships between games a different way.

So, without further ado, I present a horror game map: 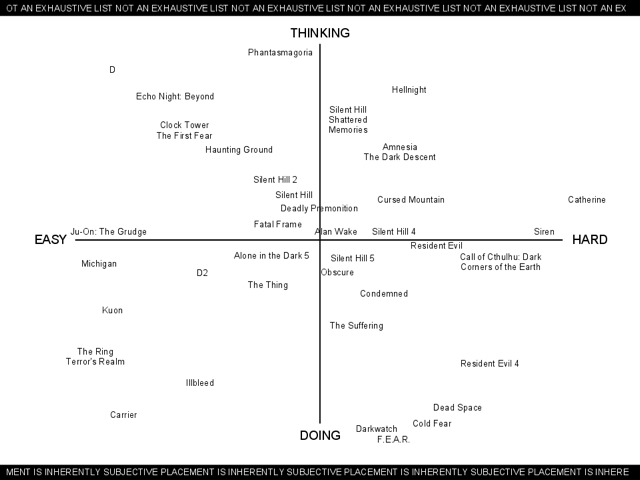 I’ve plotted a bunch of horror games upon an axis based on my personal feelings about them. I just got done complaining about the subjectivity of personal preferences and the futility of debating labels online, so please, let’s not debate the placement of individual games. If you don’t agree, make your own map! It might teach you something about what you like. Anyway, for the sake of discussion, let’s take a look at where these games fall out without worrying too much about accuracy. Oh yeah, and this is hardly an exhaustive list, either, so don’t even think of complaining about that.

OK, so let’s get down to business. There are two axes, Easy to Hard and Thinking to Doing. Games that are easy are, well, easy (we can assume we’re always talking about “normal” game modes). Hard games are hard. Games closer to the Thinking extreme are about the challenge of deciding how to proceed rather than actually performing the actions required to do it. “Doing” games place emphasis on performing the actions required to progress. Since the axes are orthogonal we can express each game in terms of both its challenge format and the degree of challenge. Dead Space is a fairly challenging game that’s all about its mechanics–there’s not a lot of thought required. D, on the other hand, is very easy and is almost entirely a puzzle game; performing actions is simple, but the challenge comes from deciding which actions to perform. The center of the plot is the “average” point–the point at which games are equally balanced in terms of thinking vs doing and are of absolute median difficulty.

OK, great, we can plot these games on a graph. Hooray. But what does this tell us about the games themselves? To tell you the truth, not much. We can infer that certain games are similar to other games by their grouping (the games near the lower-right of the graph are what people usually refer to when they say “action horror”), but on its own this mapping isn’t very useful. It gets a lot more interesting when we apply color.

These are sort of ad-hoc heat maps. By coloring regions around each game we can more easily see trends and groupings.

The first image here is colored by the country of the game’s developer. We can see that the Thinking/Easy quadrant, which is home to Silent Hill and many other story-driven horror games, is dominated by Japanese developers. The Doing/Hard quadrant is almost entirely Western developers. We can also see that there are lots of Western games around the center, whereas the Japanese games tend to reach all the way to the extremes.

The middle map is about release date. This one is interesting because so much of it is the same color: the majority of games on this plot shipped between 2001 and 2005. It’s also interesting to see the big yellow splotch in the middle that extends a little bit into Thinking/Hard. That suggests that there have been more action-light horror games recently than we sometimes remember. With the exception of Ju-on: The Grudge way over there on the left and Catherine way on the right, it also suggests that newer games are generally a little bit harder than games used to be.

The last plot is colored by critical reception. It clearly shows that Easy/Doing games score poorly almost across the board, which makes sense when you think about it: if there’s no thinking involved and the actions to perform are super easy, why play? Easy/Thinking does a lot better, perhaps because a good story is enough to carry a relatively easy game (see my previous posts about “interestingness”). The Hard side of the graph scores better almost across the board, though it looks like games that are hard but do not clearly choose between Thinking or Doing get rated lower. That might be because balancing the two is difficult, or it might be that people generally want one or the other and are unhappy with a mix, especially when there’s a little challenge involved.

I think these maps are most interesting when taken together. By looking at the three plots above, we can pretty clearly see a shift in the development of horror games over the last decade. Prior to 2005, Japan ruled the horror space. Its games tended to be mechanically simple with a focus on puzzles and story, and it produced a lot of critically acclaimed games. After 2005 power shifted to Western developers, who tend to make harder games and tend to focus much more strongly on mechanics. There are several well-received games produced by the West after 2005, but a bunch of mediocre ones too–games that didn’t go far enough in any one direction to leave a lasting impression.

Why the shift? My guess is that 2005 was the turning point because it was the year that the Xbox 360 was released. The cost of development went way up and niche genres (e.g. Thinking/Easy) were dropped in favor of mass market genres (apparently Doing/Hard). The Wii is home to a couple of exceptions to this trend (e.g. Silent Hill: Shattered Memories), but the Xbox 360 and PS3 titles are almost exclusively “doing” games that are hard. You can see why Capcom has done what it has done to the Resident Evil series; years ago they saw where the train was headed and decided to hop on. The Silent Hill series has been more experimental, touching three different quadrants over the years, perhaps as a result of the sequels being developed by different teams.

So which games do you like? I’m a fan of Thinking games, generally, and I like stuff on both the Easy and Hard sides. I can enjoy Doing games too, but they have to be really good; my problem with Dead Space and F.E.A.R. was that the Doing is fun but sort of purposeless–there isn’t enough Thinking to give me reason to progress. Resident Evil 4 is only slightly higher on the Thinking axis but it has so much variety that I was never bored. Alan Wake got caught in the middle–there was a lot to think about but the information was ultimately inconsequential, and the actual game mechanics were a little too simple for the format. I also found out that I generally enjoy Japanese games more than Western ones, at least in this genre.

To reiterate, this is entirely subjective and these plots (and my conclusions) are not intended to represent some immutable truth. This exercise is a way to force us to look at these games a different way, to think about what we like and what we do not like. It’s designed to avoid the categorization trap, and to expose groupings of games that we might not have noticed otherwise. The experiment can be further improved by finding more ways to plot these games (different axes?) and more ways to group them. The goal is not to define what these games are, but to discover why we feel the way we feel about them, and to expose overall trends. Hopefully that will inspire a discussion more interesting than simple genre assignment.